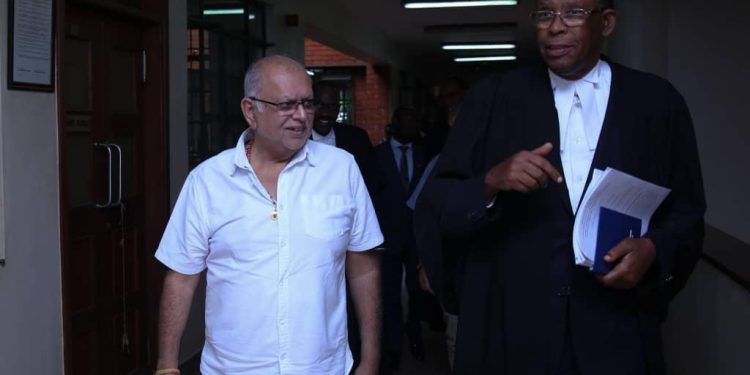 Lawyers representing business magnate Sudhir Ruparelia have objected to the move by Bank of Uganda to have their appeal withdrawn from the Supreme Court on grounds that the appelants (Crane Bank in Receivership) are trying to reverse the decision of the High Court and Court of Appeal in regards to payment of costs.

Following the take over and sale of Crane Bank, BoU filed a suit against Sudhir and his Meera Investments in 2017, BoU lost the case prompting Sudhir and his lawyers asking court to compel BoU  to pay costs of the suit since it is the one that instituted the suit.

On September 15th BoU signed its intention to withdraw the appeal by filing a Notice of Withdrawal.

The lawyers representing the businessman including Petee Kabatsi, Joseph Matsiko and Elison Karuhanga of Kampala Associated Advocates object to the move.

“We contend that this did not result in dismissal of the Appeal until court pronounces itself on this matter,” Sudhir’s lawyers notes on the notice of withdrawal read in part.

Sudhir’s lawyers contend that the BoU lawyers’ action is a manoeuvre to try to avoid paying costs, despite court having clearly pronounced itself on the matter.

Sudhir’s lawyers give several reasons why BoU should be the one to pay the court costs.

They indicate that all applications and affidavits were deposed by Margaret Kasule the legal counsel of BoU.

“It is therefore without a doubt that BoU has been instituting the said actions against the respondents as found by the two lower courts,” Sudhir’s lawyers argue.

They add that in the High Court the fact that the Legal Counsel of BoU was the one swearing and filing various documents was the basic for the decision that BoU pays the costs.

Sudhir’s lawyers also note that the Appelant (Crane Bank in Receivership) is a non-existent party and no proceedings can be commenced against them according to the Financial Institutions Act.

“Since section 96 of the Financial Institutions Act insulated Crane Bank in receivership from court proceedings, execution of other legal processes, the person that should pay the costs should be the person who instituted the suit and that is Bank of Uganda, that is so because Crane Bank in Receivership had no capacity to foot costs,” the response reads in part.

Sudhir lawyers have also asked court to return assets of Crane Bank Ltd to its shareholders after Receivership ended in 2018.