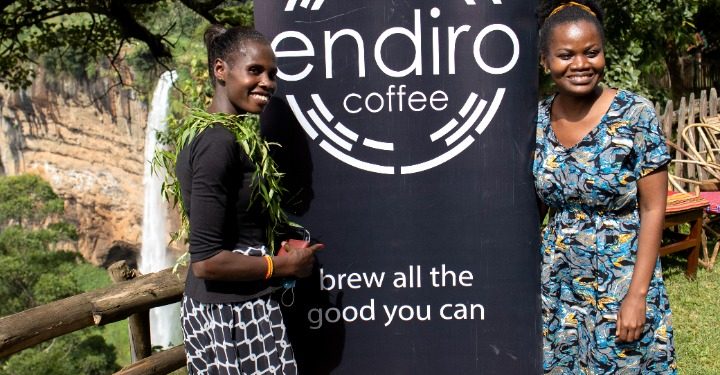 Speaking during the launch of the Sipi branch, Roger Agamba, the Managing Director Endiro Coffee Shops said, “The coffee culture is growing in Uganda starting from Kampala and is fast spreading across the country. We have opened at different locations across the country to encourage Ugandans to drink coffee.

There are different ways in which one can drink coffee, taking it black- house coffee, taking it concentrated-espresso, with milk- cappuccino, plus having your favourite coffee drink iced, especially for our hot climate.

Gloria Katusiime, the Endiro Coffee Chief Executive Officer while speaking during the launch of Endiro Coffee in Sipi, Kapchorwa said they started operations in 2011 and have since grown to 11 Shops in Uganda and One in the United States over the last 10 years.

Endiro Coffee has a presence across different parts of the country in Central at Kisementi, Naguru, Muyenga, Standard Chartered Bank Head Office, MTN Head office, and Bugolobi, in the West we’re located at Shell Buwama along Kampala, Masaka road and in the Eastern part in Iganga, Mbale and now Kapchorwa at Sipi.

The coffee growing arm of the businesses currently works with over 250 coffee farmers in Bukalasi, Bududa District. Katusiime said she wants to find ways to work with farmers in Kapchorwa to promote Ugandan coffee all over the world.

Endiro Coffee operates two arms, the coffee shops and Endiro growers which works in the communities and supports coffee farmers. Katusiime said, “Our Vision as Endiro is to be a company that partners with others to end child worldwide vulnerability through coffee.”

“Since our founding in 2011, Endiro Coffee has supported a variety of compassion and transformation projects and is committed to continuing this practice.  Since 2014, however, we have been working hard to reinvent the way we engage in the coffee business at every level so that everything we do is positive and transformational” Gloria Katusiime, the CEO of Endiro Coffee said.

She said they set up Endiro coffee with the goal of ending child vulnerability and to transform the lives of the coffee growers by paying them a premium and supporting them through the coffee value chain.

Mr Chesol Tom, the Resident District Commissioner for Kapchorwa District said he was extremely happy to associate with the launch of Endiro Coffee in Kapchorwa. Endiro coffee has a good track record in the coffee industry and will help with value addition and help our farmers with the coffee market needs.

“Through this partnership, farmers will be able to get value for the coffee that they will be selling in the market. Our tourism industry is also going to benefit because we get so many visitors here who require good quality food and accommodation,” he said.

Isaac Chemonges, the tourism officer in Kapchorwa said they’re happy and welcome the Endiro Family to Sipi and Kapchorwa. “We believe this is going a long way to boost the hospitality industry and tourism in Kapchorwa. Kapchorwa is gifted with nature and also grows the best coffee in the World. We encourage you to attach your product to Sipi falls and Land of Athletic champions,” he said.

Olympic medalists Jacob Kiplimo and Peruth Chemutai graced the launch of Endiro Coffee at Sipi. The athletes said the presence of Endiro coffee in Kapchorwa will provide quality food and coffee for the sports tourism.

Ms Chebet Evaline Kubarika said we are happy to be part of this day where we witness a partnership between Sipi community and Endiro Cofffee. “Our communities are going to be the beneficiaries of this partnership and we pledge to give you our necessary support,” she said. She also appreciated the President of Uganda for the prevailing peace in the country.