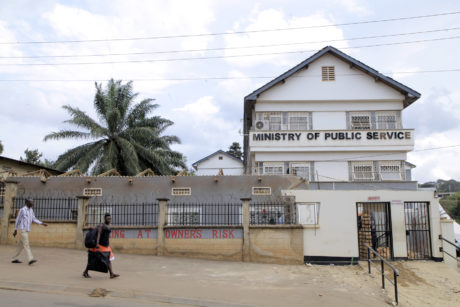 In most countries, people dream of being able to retire at 50 years but in Uganda, the constitution orders public servants to retire at the age of 60 years.

With many officers not happy with the constitution, the civil servants applied to the Public Service Ministry to have their age changed so that they remain in offices.

Many officers say the country cannot afford to discard so many skilled personnel, especially in areas such as health and education, where there is already a lack of manpower. There are also questions of how the government will meet the additional pension obligations.

According to the story published by New Vision on Tuesday morning over 1,000 senior Public servants government officers seek to reduce their age.

The National Publication stated that, in October, the public service ministry registered 830 requests from senior civil servants to have their age changed. The ministry also says some have even gone to court over failure to amend their age.

The local newspaper wrote that over 1,000 senior public servants in central and local governments have applied to the public service ministry to have their age changed.

New Vision wrote that they saw a list, of the senior officers mainly at the rank of undersecretaries, directors, commissioners, assistant commissioners and Chief Administrative Officers (CAOs), who are on the last years of work before retirement or are left with a few years to the mandatory retirement age of 60. A few applicants were aged 50 years.

In their story, they added that some of the applicants have gone to court over the public service ministry’s decision not to grant their wish. One of the applicants (name withheld) clocked 60 years this year and should have been retired. However, she went to court challenging her retirement on grounds that her attempts to change the age had been failed by the public service ministry officials.

“Yes, we have some characters on the payroll who should be retired,” a source at the ministry said according to New Vision.

They wrote that; “As of October, there were 830 senior officers who had applied to amend their age and we expect the number will reach a thousand,” a source said.

If granted, that would mean the thousands of unemployed job seekers, or those who would have been promoted to the positions would have to wait much longer before joining public service or getting promoted. The source in public service said it had become a worrying trend for civil servants due for retirement to seek an extension to continue on the payroll.

“It has become a trend now. A number of public servants do not want to retire. When they see that they are approaching 60 years, they come up with explanations, claiming to be younger than the former age,” the source said, adding that the pressure was mainly from those with political connections.

“Most of those seeking to change their age are politically exposed and related to ministers, Members of Parliament or other influential officers in the country,” the source said.

“Most of these collaborate with some rogue elements to remove vital documents from their personal files, especially documents related to their actual date of birth and then, they later come to amend their age,” New Vision wrote.

“We are opening a pandora box where ministers will decline to come to parliament,” MPs oppose meeting Janet Museveni