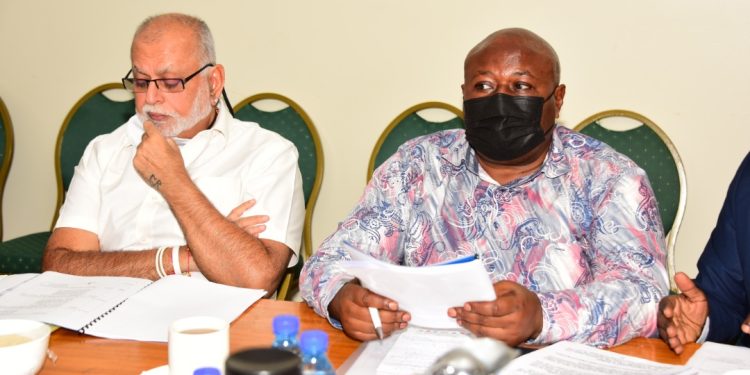 Leaders of landlords in Kampala have appeared before the Parliamentary panel on physical infrastructure, which, is processing the Landlords and Tenants Bill that was re-tabled because President Yoweri Museveni declined to assent to it after it was passed last year.

Museveni had concerns with the translation of business and private premises, and issues to do with the meaning of nuisance between occupants involving various premises.

The landlords led by tycoon Sudhir Ruparelia and Godfrey Kirumira appeared before the committee where they advocated a win-win situation with the tenants.

Among the contentious issues is how utilities are handled. Sudhir told the committee that to sort out the challenge, tenants need to be provided each with prepaid electricity and water bills.

“We want a law that can harmonise both landlords and tenants, however, it is a constitutional requirement that the government is the sole provider for utilities of power and water. But Umeme does not provide our buildings with more than one Yaka prepaid meter, this is a dilemma. Over 250 tenants will abscond from payment of power and water since NWSC also installs one meter on a building,” Ruparelia said.

When the bill was passed last year, it was provided under clause 23 that tenants shall pay rent only in Ugandan shillings, as per Kampala City Traders Association-KACITA demands. The Committee’s vice chairperson Robert Kasolo asked the landlords to explain why they have been asking for rent in foreign currency (US dollars), which posed a challenge to tenants when exchange rate rises.

Sudhir responded that the law would have to be amended to have Uganda Revenue Authority also levy taxes in dollars.

“If you want to change our rights as Ugandans, why don’t you amend the constitution? Why can’t you for instance ask URA why they charge taxes in US dollars,” he said.

When the bill was passed last year, Sudhir is on record as having said that landlords have no problem with tenants who may want to pay their rent in dollars along as it is an option provide in the law.

“There are some foreign tenants who prefer payment of rent in dollars. Therefore the clause needs to be recast to accommodate alternative agreement of the parties,” he said.

The landlords, also argued that Uganda is a free market economy and that sometimes they acquire loans from foreign banks in dollars and other foreign denominations that are based on the analysis of foreign currency rental income streams.

MPs also raised tenants concerns that some landlords that issue receipts with the amounts less than what is actually paid every month something that leads to under declaration of rental income.

Sudhir said if it happens, it has never happened in his company.  “We have a system in our company (Meera Investments) for the last 20 years, all tenants pay in the bank and we issue an invoice which is taxed by URA,” he said.

The landlords also asked the MPs to put a provision to emphasize that all landlords shall not channel security deposits by tenants on paying for the costs of renovations and repairs on the buildings, but instead it remains to serve the purpose of rent arrears settlement.

The landlords also maintained that the proposal to introduce criminal offences against the landlords should be dropped from the Bill because if passed as it is tenants will only be subjected to civil remedies.

Shs8m mouse! "They are very high technology and could not be found anywhere in Africa," says Dr Musenero