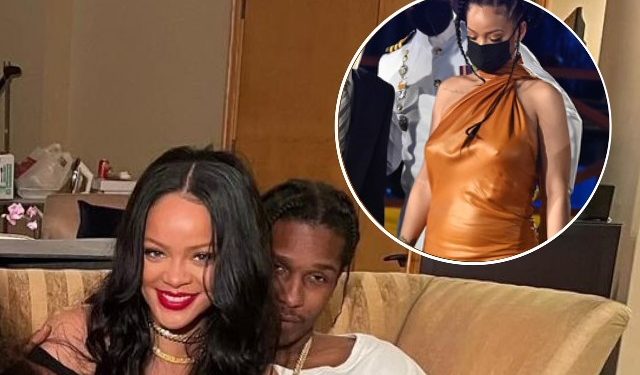 On November 29, Rihanna was named a ‘national hero’ in her native Barbados. Amid this, many fans speculated that the singer might be pregnant with ASAP Rocky’s baby. In reality, it is not true.

Rihanna and ASAP Rocky’s relationship has made headlines ever since the pair went public. While fans are excited to see what’s next for the couple, some thought that they might be starting a family soon because of the recent pictures of the singer that were taken during the Barbados event.

While the internet is convinced that the singer is pregnant, in reality, it is not true. Just a day before Rihanna made an appearance at Barbados, she had shown off her figure on Instagram stories while promoting Fenty pajamas.

The singer was spotted wearing a blue check shirt pajama, the latest in her collection. The unique design sure did have a lot of people talking but it also proves that the current pregnancy rumors are baseless.

HOW DID THE RUMORS START?

The rumors started on social media after some fans speculated that Rihanna might have a baby bump because of the pictures that were taken at Barbados.

At the same time, a verified Twitter page that goes by the name ‘The Academy’ tweeted: “Rihanna is pregnant with her first child with A$AP Rocky.” In the same thread, the page notes: “New Drake song coming – Congratulations but it should’ve been me.”

It is quite possible the Twitter page had just tweeted out the rumors that were going around on the internet as it fails to provide factual data as to how it got the information.

This is not the first time that the singer has found herself surrounded by these rumors. Back in September, Rihanna had done a photoshoot that had everyone convinced that she was pregnant. In reality, she was not.

Rihanna was praised by the country’s prime minister, Mia Mottley, and given the title of “national hero” because of the singer’s “extraordinary commitment to the land of her birth,” as per The Guardian.

She further applauded the singer for: “the imagination of the world through the pursuit of excellence with her creativity, her discipline, and above all else, her extraordinary commitment to the land of her birth son behalf of a grateful nation, but an even prouder people, we therefore present to you the designee for the national hero of Barbados, Ambassador Robyn Rihanna Fenty.”

Mottley ended her speech by telling Rihanna: “May you continue to shine like a diamond.”