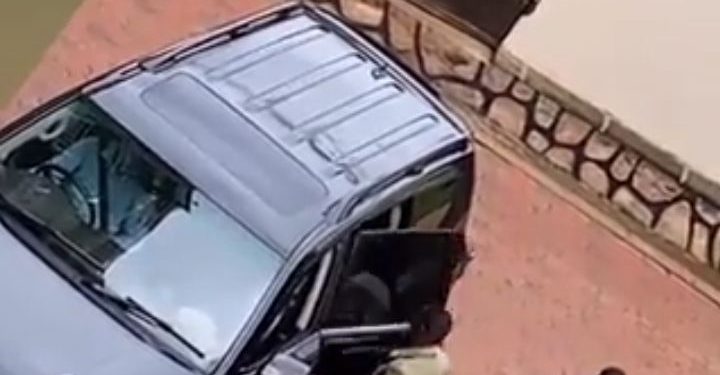 Canary has sent tongues on Twitter wagging yesterday after a video clip of him being dropped off in a police chauffeured SUV for what seemed to be a date with his wife, Sasha.

A Twitter user who identifies herself as Chubby Evelyne sparked off the conversation on Twitter after she posted the video clip and questioned, “When did journalists reach this level. It is only Canary Mugume that I have seen do this,”

The video seems to have been harvested off Canary’s wife, Sasha Ferguson’s ticktock page.

In the video, she intimates that she had just gotten off a flight and Canary was linking with her for a lunch date.

“When he shows up to have quick lunch with you as soon as you land back,” read Sasha’s caption. The caption was complimented by a crimson heart emoji.

In the 10 second video, a chauffeur clad in police uniform alights his driver’s seat and goes out to open it for the passenger, who turns out to be Canary Mugume.

The police chauffeur jumps back in the driver’s seat as Canary, who looks relaxed in an untucked shirt walks to meet his date.

By today morning, the NBS journalist has been trending on Twitter following the revelation of his VIP lifestyle.

Most Ugandans were however curious to know how the journalist had suddenly jumped into things.

Sancho’s Rolex Guy joined the conversation while seeking an explanation.

“We need a scientific explanation into how Canary went from being a guy who used a tape measure in a crime scene to the guy who’s getting this kind of VIP treatment,” he tweeted.

Other tweeps went forth to make fun of the newsroom situation at NBS right now.

A one Savior Alpha tweeted, “When you work in the same newsroom and suddenly realize that your mate Canary has bodyguards’”

Male tweeps used this as an opportunity to “bash” the other gender.

“Canary was living his VIP life in silence…but because the other woman wanted to prove something to strangers suddenly then BAM,” tweeted a one Useful Idiot.

Museveni pledge gone wrong: How a ‘mufere’ received Moses Kipsiro’s vehicle and has been enjoying the ride since 2014

Museveni pledge gone wrong: How a 'mufere' received Moses Kipsiro's vehicle and has been enjoying the ride since 2014