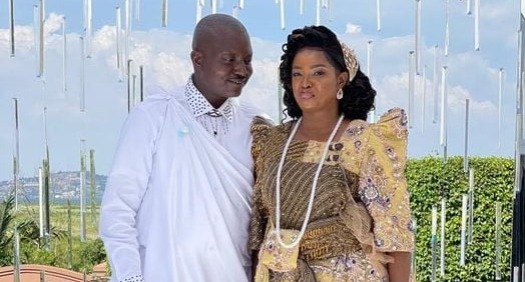 In 2019, renowned Pastor Aloysious Bugingo asked the court for a ‘decree nis’ to dissolve his marriage of 29 years with Teddy Naluswa citing that their marriage had irretrievably broken down.

For starters, Decree nis is an order by a court of law stating the date on which a marriage will end unless a good reason not to grant a divorce is produced.

Two years later, the divorce has received resistance from Naluswa. She has refused to sign the divorce papers saying it’s against God’s will.

However, the Salt Media proprietor has today been introduced by his lover Suzan Makula in a traditional marriage (Customary) called Kwanjula.

Customary marriage” means a marriage celebrated according to the rites of an African community and one of the parties to which is a member of that community.

Matooke Republic contacted some lawyers to explain whether today’s traditional union between Bugingo and Makula is legal given that the pastor is yet to secure the divorce.

“Legally the introduction is void ab initio. In law it is good as it never happened. Until he secures divorce,” stated Ainembabazi Eunice, Managing Partner at Reeve Advocates. The term void ab initio, means “to be treated as invalid from the outset.

Similarly, Kirya Emmanuel an Associate at KBW Advocates stated that since Bugingo is not yet officially divorced; his traditional marriage to Makula is void.

“Bugingo is not officially divorced.His traditional marriage to Makula is void,” said Kirya