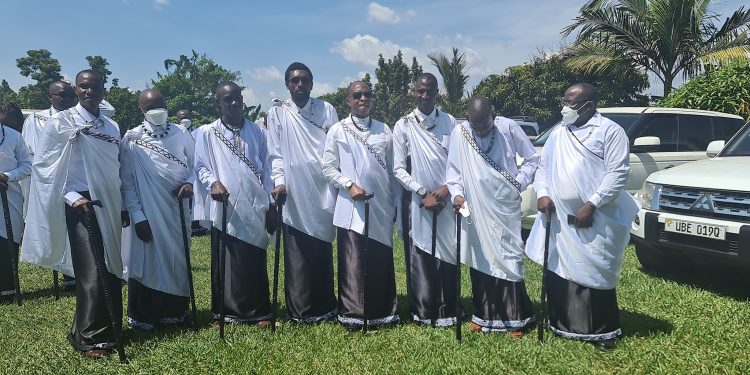 The function has been held in Kyebando, Kawempe and graced by various famous people including prominent comedians, businessmen, and media personalities.  Politicians and musicians such as Bebe Cool also attended the beautiful introduction.

Matooke Republic has compiled a list of some of the famous personalities who attended Bugingo and Makula’s introduction. These include:

Singer Bebe Cool and wife Zuena Kirema have graced the event. The couple is sitting on the side of Makula’s family as she’s one of the pioneers of the Gagamel Phamily fans group.

Frank Gashumba
Frank Gashumba is enjoying a front seat on Bugingo’s side. He has been seen issuing fat envelopes of cash.

Gashumba seems to be acting the role of Bugingo’s financial pointman as he distributes cash to the Bako (in-laws).

Ssenkubuge Siasa
Renowned stage and movie drama actor Charles James Ssenkubuge aka Siasa has graced the event of his boss. Ssenkubuge is the General Manager and Special Programmes Director for Salt Media.

Seasoned comedian and former Rubaga South Member of Parliament Kato Lubwama is one of the surprise attendees at the Kwanjula. Lubwama has always openly supported Bugingo’s move to marry Suzan.

Pastor Kayiwa Simeon
The lead Pastor of Namirembe Christian Fellowship, Pastor Simeon Kayiwa is a close friend to Pastor Bugingo and it is no surprise that he has attended the function.

Other known faces at the event are media personalities; Miles Rwamiti, Kasuku and Ibrah K Mukasa among others.