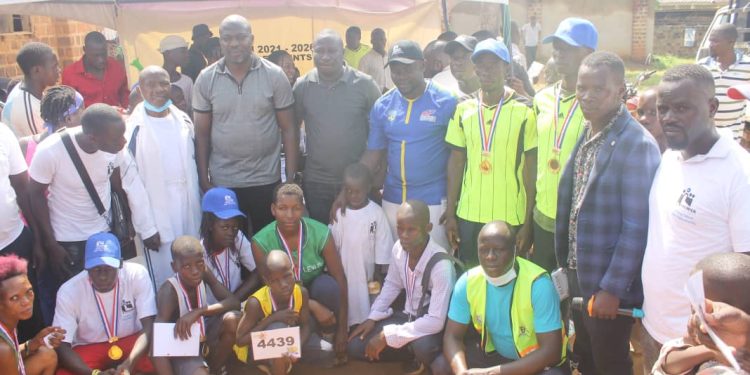 It was the first time in many months since the lockdown in 2020 that such a crowd showed up in Ngandu center for any event.

Ngandu LCI chairman Ibrahim Kitenda said the last time such a crowd and excitement came to his township was more than 28 years ago when Kabaka Ronald Mutebi came to inaugurate Ngandu Primary School in 1993.

The significance of the half-marathon was themed around supporting community self-help projects including the school whose walls have given way and started collapsing.

The marathon organized by the area councilor Mike Ssegawa, was flagged off by veteran politician and philanthropist Rev Dr Kefa Ssempangi, a resident in the area.

Over Shs2million was up for grabs in cash prizes as well as a number of other material assortments. Books donated by Ham Kiggundu Foundation were donated to community leaders to help them get ideas to inspire youth out of abject poverty. Ham Kiggundu is the author of Success and Failure based on reason and reality. His latest book Reason as the World masterpiece was among the books that were given out.

A number of youth in Mukono, a township only 20km out of Uganda’s capital Kampala, are seeking opportunity to thrive in a highly jobless country. Mr Kiggundu’s books inspire youth to start to employ themselves and have mental and physical discipline to use their money well.

The half-marathon which started in Ngandu and went through Kigombya, Kirangira, Kitete, Gulu A, before closing at Ngandu Community Primary School, was won by Lutimbe Gerald from Kirangira village.

The run put a spotlight on Ngandu School which is in bad shape.

Mukono Municipality mayor, Elisa Mukasa Nkoyoyo, gave reassurance to the community that the school shall have brand new two classroom blocks in the upcoming budget.

Chief Guest Engineer Sebamala, the Bukoto Central (Masaka district) MP said he will back MP Betty Nambooze (Mukono municipality) in her bid to raise standards of education in Mukono.

“I will support your MP when she lobbies on matters of education for this area,” said chief guest, MP Richard Sebamala. “You had one MP, now you have two, to support your causes.” He said, adding that he has donated a 100-seater tent to the Area Councilor Mike Ssegawa, to support him to organize more events.

Mr Ssegawa, has been involved in lots of sports activities in the area geared towards supporting youth to develop their talents as well as creating unity in the villages he represents. He uses sports to challenge youth to desist from engaging in criminality, and other social evils, while embracing the culture of work, saving and investment.

Mr Sebamala inspired youth and winners to be focused and determined in their work so as to escape the poverty traps.

“There is no free money.” Sebamala said.

Ngandu Primary School was donated to the community by the late MP Mambule Kiggundu as the first free education center in Mukono. Kabaka Ronald Mutebi inaugurated the school in 1993.

SafeBoda launches 3rd vaccination drive at their academy in Kyebando