AFCON: Meet Rwandan Salima Mukansanga who is set to become first woman referee at the continent’s most prestigious tournament 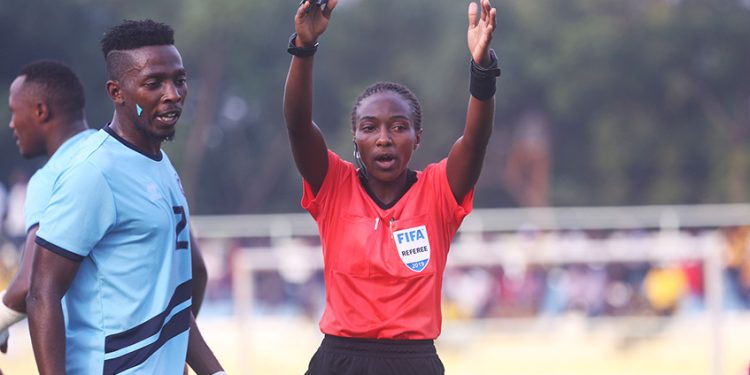 The Africa Cup of Nations 2021 tournament begins on Sunday, as 24 countries prepare to battle it out in Cameroon to win the continent’s most prestigious trophy.

AFCON is the main international association football competition in Africa. It was first held in 1957 and since 1968 has been held every two years.

CAF released the list of 63 match officials who will officiate at the tournament and among them is Rwandan Salima Mukansanga.

Mukansanga is one of the four female match officials on the list. Others are; Carine Atemzabong (Cameroon), Fatiha Jermoumi (Morocco), and Bouchra Karboubi (Morocco).

However, Mukansanga is set to become the first woman ever to officiate as a center referee at the Africa Cup of Nations.

Mukansanga has been to the 2020 Olympics in Tokyo Japan, 2019 FIFA Women’s World Cup in France among other big events.

According to local websites in Rwanda, as a teenager, Makansanga wanted to become a professional basketball player. But about 15 years ago, she decided to become a football referee.

And since 2018, she has been appointed to officiate different matches in Rwanda, Africa, and the world at large.

She is likened to one of the greatest referees Pierluigi Collina as she is said to have similar authority on the field like that of the Italian.