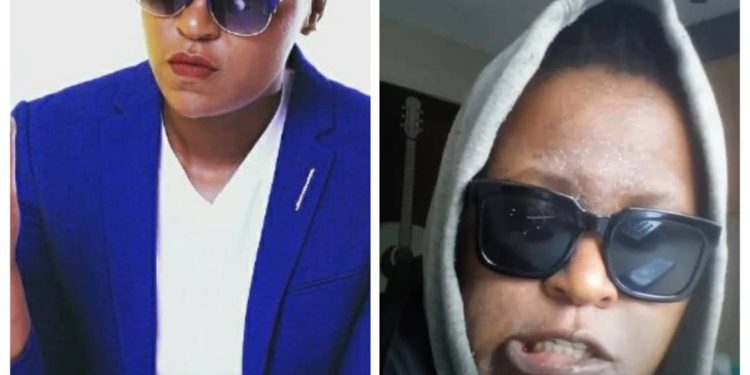 People passionate about the industry early in 2010 can attest to the game changing greatness of the emcee. In that year, Keko who was one year old in the music industry, scooped ‘The Buzz Teeniez’ award for best female and best upcoming artiste. In a country where many who join the music industry are looked at as wannabes trying to earn cheap popularity, like a sore thumb, Keko still stands out.

However, she is now at the centre of a whirlwind controversy after appearing in an Instagram live video in a sorry state, intoxicated, with broken hair, a pale and scaly skin on Monday evening.

One of the reasons as to why we note that the rapper has lost her glory is that if you watch the live video she shared, the audio in the video was broken but she didn’t even seem to realize that. Despite many warnings from her fans alerting her on the issue, the rapper who looked to be very lonely, depressed, and not aware of what is happening around was not bothering at all as she cleans her nose with her hands, smacks her lips, flashes the middle finger sign, sipping on her drink and smoking cigarette.

Most of her fans realized that their star was not okay and needed help so they started asking her to stop recording in vain and others requested whoever can help her to reach out to her and take her to rehab.

This is not the first time Keko who once drove the Hip-hop revolution in Africa shocked her fans.

Keko who once drove the Hip-hop revolution in Africa seems to have lost her way with the celebrity life she formerly lived, battling and tackling various demons that have been major hiccups in her career.

In Canary Mugume’s 2019 documentary, “Smoking music away”, Shadrack Kuteesa who had two stints with her as a manager disclosed that Keko had been a culprit of drug and substance abuse and therefore attributing it to the frustrations of her once stelar music career.

Keko’s bad girl image soared further when she openly declared herself a lesbian in a country whose values shun the practice.

In a conversation with Public Radio International’s Andrea Crossan, she revealed: “I’m sure everybody in the entire country knows I’m gay.”

Crossan said that she offered Keko the option to contact her to remove her coming out statements from the interview, which she declined.

Keko who is currently living in Canada also shocked many in 2019 when she shared a sad rape tale on her official Twitter account.

In her tweets the rapper revealed that she was raped after spending a night at the residence of an elderly woman she had trusted.

“So, after I was invited to this event by an elderly lady from my motherland to come share her moment of triumph and by elderly, I mean limping and needing assistance walking elderly I obliged as she was somebody I remembered from my childhood, a neighbor. I mean that was a great move,” She tweeted.

“I never thought people can pay people you know to invite you to an event, spice your drinks and have you raped then tell you a wild story like you are a first-time drinker.” Keko explained.

The ‘This how we do’ hitmaker disclosed that the rapist beat her unconscious with a rock which left her with a bruised face prior to his intentions. She only woke up the next day without her underwear.  “When I woke up, I visited the hospital where the doctors carried out a full body examination and it was discovered that I could have been raped.” She narrated.

“This didn’t bother me for obvious reasons but it laid to rest the narrative I had in my head. I won’t mention her name but if you’re reading this, I hope God grants you healing, wealth and meaning that you were hoping to get by agreeing to participate in this assault.” Keko added.

Keko remains one of the Uganda’s most exceptional lyricists and an entertainer as well. Her talents have won her numerous awards, record deals and collaborations with A listers.

Unfortunately, for many of her fans, those pass for her good old days as her latest antics serve a sad reminder that her demons live on. That, is never a good thing for the art.

Does the plot then thicken? Only time can tell.