How would you react if your girlfriend or wife gave birth to quadruplets? Man runs away from wife after she gives birth to four babies in one go 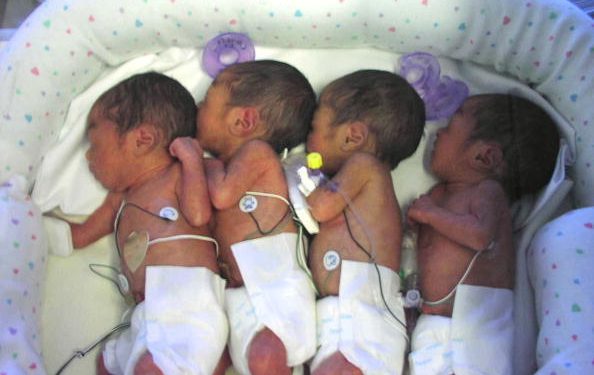 402973 02: Newborn Quadruplets (L-R) Preana, Audreana, Natalie And Melody Were Born March 25, 2002 In Sacramento, Ca. The Largest Baby Weighing 2 Pounds, 8 Ounces And The Smallest Is 2 Pounds, 5 Ounces. Having Identical Quadruplets Is A One In 11 Million Event. (Photo By Getty Images)

How would you react if your girlfriend or wife gave birth to four babies in one go? Such is the case of a one Asiimwe Elkangiro who abandoned his wife upon learning the shocking facts that she was to give birth to quadruplets.

Mary Kyomugisha, a resident of Kasaana Central 1 Village, Rushenyi County, Ntungamo District was left in shock after her husband abandoned her all-girl quadruplets, at Kisiizi Hospital in Rukungiri District at the weekend.

In a report filed by Daily Monitor, Elkangiro fled the hospital upon learning that his wife was supposed to undergo a caesarean section to have four babies delivered.

According to the caregiver, Moreen Nayebare, the couple already had one child before the quadruplets.

“The situation is worrying because the father of the quadruplets is polygamous. He has other two wives and Kyomugisha is the third. She is stressed because she needs money to clear hospital bills and treatment which is more than shs 1m,” Nayebare noted.

According to Nayebare, Kyomugisha became mentally disturbed when she found out that her husband had fled the hospital.

Nayebare called upon non-government organizations, government leaders, and well-wishers to come to their rescue.

Kyomugisha’s troubles are far from over as she struggles to buy supplementary milk for the babies.

“The babies are always crying because I cannot produce enough milk. One of my breasts has an issue so they are depending on the other breast. My husband is not supportive and affording milk is difficult,” Kyomugisha narrated.

Nayebare, called upon non-government organizations, government leaders, and well-wishers to come to their rescue.

Kisiizi Hospital administrator, Mr. Moses Mugume, confirmed the development saying the operation was carried out at 32 weeks and the babies were out in incubators as the biggest weighed 1.6kg.

He further appealed to good Samaritans to help Kyomugisha with the hospital bills and other necessities.

This case is not unique to itself, in 2016, a man abandoned his wife over having many sets of twins.

Last year, Sharifah, a resident of Seeta, Mukono District was abandoned by her husband after delivering triplets.