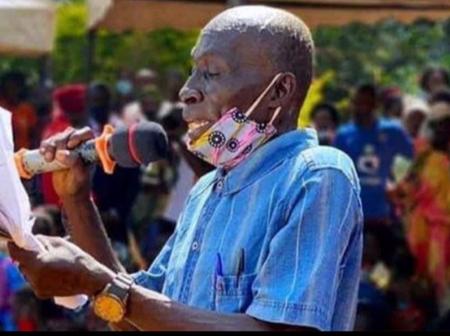 Jjemba Matte could arguably have been the most “memed” about Ugandan towards the end of last year. The burial conductor not only amassed both street and internet credit but made some new fortunes as well.

Seeing his new found fame, his ex-wife that had abandoned the marriage previously sought to return. Florence Nabaweesi, Jjemba’s run away wife, has opened up about the story of their love life.

According to a report filed by The Daily Monitor, Nabaweesi, 46, sired three children with Jjemba, but then got married to a neighbor after Jjemba allegedly caught her engaging in an extra marital affair with the neighbor.

Jjemba officially handed her over to the neighbor, following the incident. Nabaweesi denies this and rather accuses Jjemba of the infidelity.

“We had been in marriage for more than 15 years but things were not moving well. My husband (Jjemba) was having an extra-marital affair with that woman who he finally married, I could not accept this,” she said.

However, a new investigation by The Daily Monitor reveals that Jjemba’s claims might be true.

According to John Kyambadde, the Mbulakati Village Chairman, he was among the elders that witnessed the handing over of Ms Nabaweesi to the neighbor.

Nabaweesi claims that Jjemba initially treated her well and showed her love which changed when a third party got involved.

She further reports that she fell in love with Kato Mwanje, a neighbor who showed her so much love, that when she separated with Jjemba, she got married to the neighbor. She however says she is willing to return to Jjemba if he fulfils her demand of buying a separate house for her.

“He is now rich and can now afford to build a nice house for me unlike in the past when we even lacked sugar and salt,” Nabaweesi said.

Following the publication of Jjemba’s story in the media, many people have come out to support him in order to better his standards of living.

Jjemba has thus far received 30 bags of cement, floor tiles, mobile phone, a community radio, unspecified amounts of cash, solar lighting systems, a television set, among a plethora of other luxuries and necessities all together.

Despite Nabaweesi desire to return to her former lover, the social media made celebrity has other plans, he is planning on marrying his current wife.

“I am an old man I cannot manage two wives. Many women now make love advances to me but I don’t want to annoy my wife who has been there for me through thick and thin,” he said.

“As a celebrity, many women want me to love them but I have to act mature and observe self-discipline,” he added.

Nabaweesi who is lately among residents welcoming visitors at Jjemba’s home almost on a daily basis, says, she is happy that the father of her children has become famous.

Jjemba, however, has bigger problems to deal with as thieves have now become a huge concern to him as they harbor plans of stealing his donations.