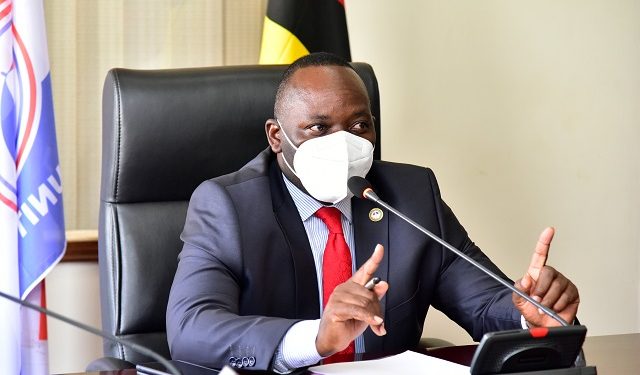 The Leader of Opposition in Parliament, Mathias Mpuuga, has dismissed allegations that the National Unity Platform (NUP) top bosses are clashing amongst ourselves.

Reports about the division in NUP have been circulating on social media but had not picked that much attention till New Vision ran a front-page story about the same today.

The story was run under the headline ‘ NUP top bosses in bitter split. In the article, it was alleged that Bobi Wine’s real name Robert Kyagulanyi loyalists accuse Mpuuga and his camp of 20 Members of Parliament of betrayal when it comes to pushing the struggle forward.

Mpuuga has responded to the reports saying they are baseless allegations aimed at creating non-existing conflicts in their party and confusing the public.

“This is probably a figment of somebody’s wild imagination. I belong to the top organs of the party, and, meetings sit as and when it is necessary. I have not heard a policy or decision disagreement to the level I have seen in some form of a shabbily cooked story to wit in The New Vision,” said.

According to the New Vision article, NUP recently held a party meeting that did not end well as it turned into a ‘shouting contest’.

However, Mpuuga said that there have been many fake reports of what transpired in their recent retreat.

He said that the meeting was to review their performance in the last six months and their focus for the New Year.

“A party is an organization in the public domain; not somebody’s estate. If there are any fundamental departures on positions or approaches, they’re openly discussed, and such can’t constitute a fissure in the party.

When we meet, we deliberate on issues within and without the party – in the country, in Parliament, etc. We are not a bunch of fools that whenever an issue comes, we chorus about it; we deliberate,” he said.

Mpuuga said they agreed to improve, re-orient their young and new MPs to best represent their people and afflictions of the society.

He also disclosed that they discussed the major challenges in the country; Human Rights violations, the continued arrests of their members, and the duty they have as the leading Opposition party, and how best they can work with other parties to ensure that the final push of the ‘dictatorship’ is a concerted effort.