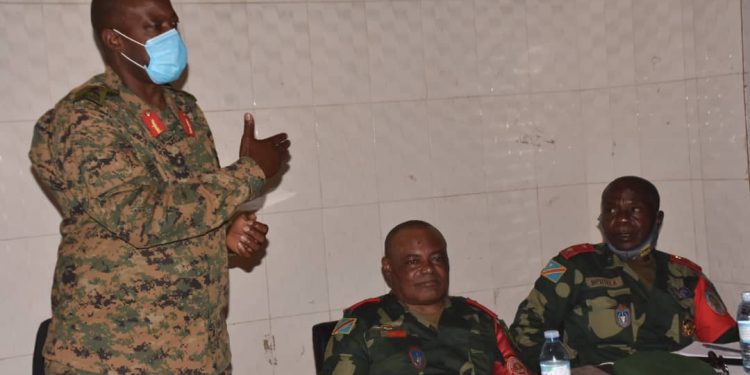 The UPDF Mountain Division Commander Maj Gen Kayanja Muhanga and his DRC counterpart, the Commander of Operation Sukola Grand- Nord, Maj Gen Camille Bombele have held a meeting at Hotel Kasindi in DRC, aimed at designing mechanisms of securing the road construction projects and opening up a second axis against ADF terrorists.

Gen Kayanja Muhanga said that the meeting emphasis was to secure the road construction of the Kasindi – Beni – Butembo highway.

“The road construction was agreed upon by the two Presidents, so we are here to discuss modalities of how we are to jointly secure this project. Together with our counterparts, this task will be executed satisfactorily,” said Gen Kayanja.

Uganda is set to construct 223km of roads inside the Democratic Republic of Congo to a tune of Shs243.7 billion.

The first road will run from Kasindi to Beni (80km), the second one will integrate the Beni-Butebo axis (54km).

The third road will move for 89 kilometres from the border town of Bunagana, through Rutshuru to the strategic city of Goma, the capital of the North Kivu Province in DRC.

The operation started a month ago, it has been reported that 34 “terrorists” had been captured and 31 Congolese hostages freed while about two UPDF soldiers were dead.