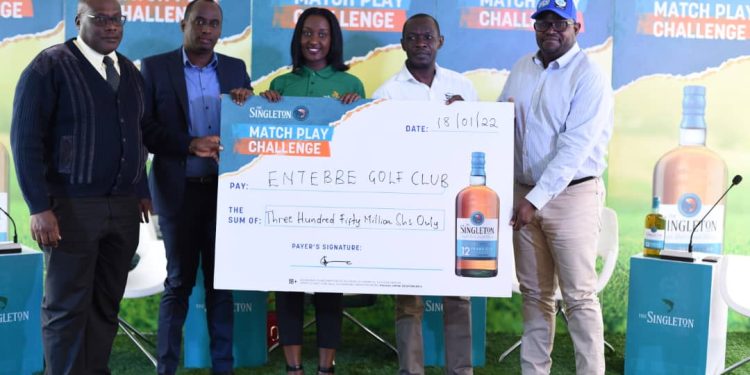 Undeniably the most anticipated tourney on the Ugandan golfing calendar, the Singleton Match Play Challenge is back for Season Six.

After an abrupt end to Season Five owing to Covid-19 pandemic-related lockdowns, the golf series is set to return for its sixth season with an enthralling qualifying round slated to tee-off this Saturday, January 22, at its traditional home, the Par 71 Entebbe Club.

Played on a medal-four ball better ball format, the competition has attracted over 228 players who will be subjected to a qualifying round that will see only 64 pairs chosen for Round one that is slated for February 12, 2022.

“The top 64 pairs from the qualifying round will make the cut. Only players who are fully paid-up members of their respective clubs are eligible to play in the Challenge,” Jacob Byamukama, the Entebbe Club Captain said at the press briefing to announce the new season earlier today.

Started in 2017, the Singleton Challenge has been an enormous success with a mix of competitive golf and fun-filled 19th hole experiences.

“I cannot tell you how proud we at UBL are of the Singleton Challenge. Singleton is about crafting first impressions while creating lasting ones. The Singleton Challenge has within a few years of existence cemented its place as Uganda’s best-golfing adventure climaxed with the most remarkable 19th hole experiences,” said Christine Kyokunda Singleton Brand Manager.

As is the tradition, the six-month-long challenge will be held in a series of knock-out tournaments that will be held every second Saturday of the month. The winning pairs from every month will advance to the finale in June.

The Season Six winning pair will be rewarded with a fully-paid trip to a major golfing tournament slated for January 2023 in Dubai, United Arab Emirates.

Other partners of the Singleton Challenge include NCBA, DSTV, Rwanda Air, and Riders Lounge