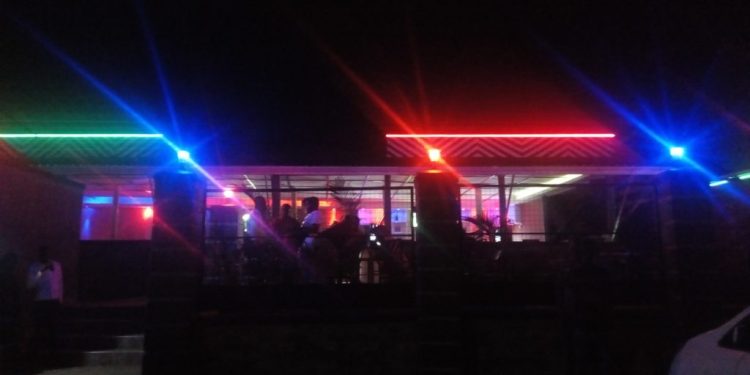 Due to the effects of the Covid-19 pandemic, bars were instructed to close as part of measures to curb the pandemic. While others followed the instructions, others were quick to innovate, morphing into restaurants so as to keep business afloat. However, despite these spots turning into restaurants, people kept frequenting them to drink beer and also enjoy the booming restaurant music.

Matooke Republic brings you the nightspots that have made a mark for themselves this lockdown, keeping their patrons’ spirits buoyant despite the nightlife being compromised.

Just in case you are familiar with the term big boys, then Drew and Jacs is the hub of the said persons. In lockdown, the nightspot was the talk of Twitter when a video clip of patrons letting loose went viral.

If anyone got nostalgia from times before the lockdown, Drew and Jacs was the place to relive that nostalgia.

At Drew and Jacs, the party literally never stopped.

The Meat Guy became the hub for Kampala’s middle class and cooperate crowd. Located at the square in the industrial area, the youth were attracted to the spot’s signature meats and cuts, the open-air rooftop theme, and the bubble and bustle of young energy that shot to peak levels during Fridays.

For the young, middle class, and corporate with some cash to blow, the meat guy kept the party popping.

The absence of loud music and the option of one being able to enjoy music at their own convenience has yet made this spot a favorite among Najjera’s uppermost echelon.

The state decided to make the vaccination process a much more enjoyable one for the citizenry and among tactics deployed, was one to have people vaccinated at their favorite hangouts.

Among these hangouts, was Venti. However, due to nostalgic purposes, when patrons got their jabs, feeling corona proof, they never left. The party simply prevailed and it has never stopped.

Located in Ntinda, just past the posh Isabella lounge, the Garage has set itself apart as one of the top hangouts in the greater streets of Bukoto, Ntinda, Naalya, and Kiwatule.

The convenience the bar offers to its patrons has made it a popular hangout.

Levels had established itself as a brand to reckon with when it comes to the world of letting loose. Nevertheless, its loyal crowd of patrons kept the flame burning regardless of the surging diseases that had evaded the globe.

Located in Kamwokya, just after Rider’s lounge, Catwalk lounge had become a favorite for many party-goers due to its humongous parking lot and its secluded nature. Partygoers who prefer their wealth to whisper were major patrons in this spot.

Located in the Namugongo valley, Asylum restaurant and Lounge, despite having rebranded to a restaurant due to Covid related disturbances, Namugongo patrons kept running gaga over the spot’s convenience, tasty food, live band, generous pork roasts, and a wide assortment of beverages.

The less known spot is projected to be the next big thing in the world of night hangouts.

It attracts Namugongo’s affluent as Monday to Monday, past work hours, you will find SUVs and other big body cars being pampered at the washing bay section as patrons enjoy bites of pork and ice-cold beers.

You cannot dare associate yourself with anything party in Kampala if you have not been to Bandali Rise on a busy Saturday or Friday night.

In Kampala, the [party begins and ends at Bandali.

The street is so famous that it has an entire song dedicated to it. To know what Bandali Rise means to the party community, just type, “Bandali Rise” into your search box.

Bandali, the home of the vampires, harbors, Caliente, X-hub, Thrones, the Alchemist, Mango Groove, among a plethora of other bars.

Mentioning one bar on this street is a disservice because the street operates as a unit. Without Bandali Rise, the Kampala nightlife would mean nothing.

The following bars do deserve an honorable mention as well: