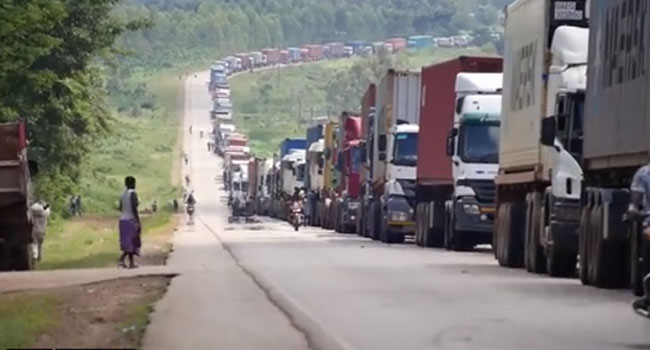 Following an accident that claimed the lives of nine people and injured 19 others in Agali Sub-county, Lira District on January 10, the Authorities in Lira City have banned women from sitting in front of the trucks as part of the efforts to mitigate the rampant road accidents in Lango Sub-region.

The accident occurred after a Fuso truck transporting traders and their goods got involved in an accident at Pii-awac swamp, seven kilometers east of Lira City.

The vehicle was returning to Lira City from Ajuri weekly market in Abako Sub-county, Alebtong District when the accident occurred.

Police attributed the accident to reckless driving, speeding, and overloading.

However, female market vendors, especially those that seat in the front cabin together with truck drivers, have also been blamed for numerous accidents on most of the roads in Lango Sub-region.

The female passengers are accused of wearing short dresses which expose their thighs, an act that distracts drivers thus resulting in accidents.

The chairman of Lira City Mobile Market Vendors Association, Patrick Opio Obote, said that some of their female members dress indecently and demand to sit in the co-drivers seat.

He added that such women often claim that they do not want to sit behind the truck because of dusty roads.

“To reduce accidents, we have resolved that with effect from Monday, January 17, no woman shall be allowed to sit in front of any truck transporting traders from Lira City to any weekly markets,” he said.

Dorcus Adongo, a market vendor said she has always seen her female colleagues ‘fighting’ to occupy seats in the driver’s cabin.

“These women always wear short dresses. Whenever they reach their destination at the weekly markets in the villages, they take the drivers away to the local bars where they offer them drinks and food,” she said.

Tom Adila, the chairperson of truck drivers in Lira City said there are some drivers who are not disciplined and law-abiding.

“They mostly employ their relatives in a bid to minimise the costs they would spend on paying qualified drivers,” Adila said.

Bernard Anyeko Matsanga, the spokesperson for Lira Urban Transporters Association, said the implementation of the decision is now in full force.

“No woman is allowed to sit in front with the driver, even if you are the wife of the owner of the vehicle, we are not allowing you. Drivers are obeying all the directives and none of them is overloading or speeding. They are driving at normal speed,” Anyeko.

The deputy director of Traffic and Road Safety, Phillip Acaye, said that statistics recorded during the festive season between December 23 and December 25 last year, and from December 31 to January 2 this year, put North Kyoga region in the second region with the most accidents.

He directed traffic police officers to start using the CCTV cameras to monitor trucks and arrest all drivers who are violating traffic rules and charge them accordingly.