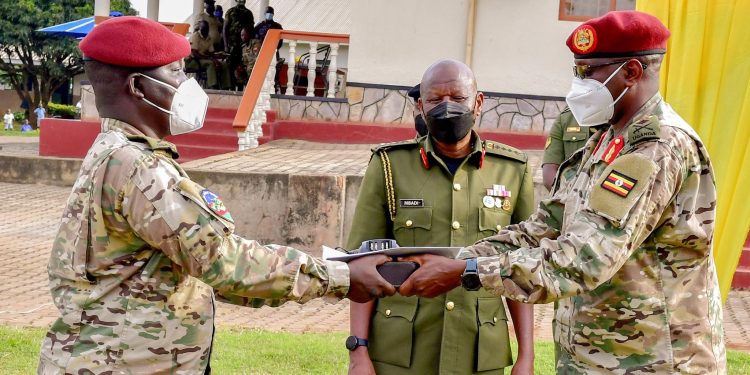 He replaces Brig Gen. Peter Candia who has been sent on course as the National Defence College by the Commander in Chief, President Yoweri Kaguta Museveni.

Busizoori took over the office yesterday and the Chief of Defence Forces Gen Wilson Mbadi presided over the handover ceremony.

The function took place at Special Force Command Headquarters in Entebbe where Gen Mbadi asked the new commander to uphold the virtues of the SFC forces.

The Special Forces Command is mandated to protect the Head of State, his immediate family members, and other Very Important Persons (VIPs) in the country.

Who is Brig Felix Busizoori

Having joined the UPDF in 1997, Busizoori completed the recruit course in 1998, and a year later in 1999, he completed the Cadet course.

The new deputy SFC commander did a VIP course in 2000, a Political Education and leadership Development Course at NALI, Kyankwanzi in 2006, and a Company Commander’s Course in Jinja, the same year.

Having started as an Infantry Platoon Commander in 1999, Brig Busizoori served in the position until 2001 before being elevated to become the second in command for Special Company, a position he served in between 2001 and 2003.

In 2011, Busizoori became the Commanding Officer Marines until 2012 when he became the Director Plans and Strategy, a position he served in for one year until 2013 when he was appointed the Director Operations until 2018.

KLA’rified sets the stage for Blankets and Wine

KLA’rified sets the stage for Blankets and Wine