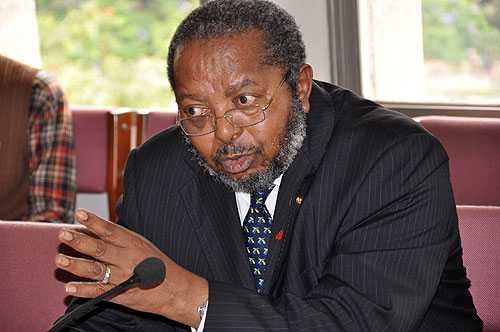 The Governor of Bank of Uganda (BOU) Governor Emmanuel Tumusiime Mutebile is dead. He has died at the age of 72 years.

According to BOU, Prof Mutebile passed away on Sunday January 23 at Nairobi Hospital.

He was forced to flee Uganda in 1972 after he gave a speech publicly criticizing the expulsion of Asians from the country by Idi Amin. He fled to England via Tanzania, and was able to finish his studies at Durham University, graduating with an upper-second in Economics and Politics.

In October 1974, he began his post-graduate studies at Balliol College, Oxford, before returning to East Africa. He entered the University of Dar es Salaam to lecture and conduct research while pursuing his doctorate in economics. In 2009, Nkumba University, a private university based in Nkumba near Entebbe, awarded him an honorary Doctor of Philosophy degree in recognition of his “great contribution towards the development of Uganda’s financial sector.

Between the years 1979 and 1984, Tumusiime-Mutebile was appointed to several government positions in Uganda ranging from deputy principal secretary to the president at State House in 1979, to undersecretary in the ministry of planning in 1981 where he rose to senior economist and then chief economist in 1984. In 1992, he was appointed permanent secretary to the newly combined ministry of finance planning & economic development, a merger that he had advocated while working under Minister of Finance Gerald Ssendaula.

He is the longest-serving chief executive in the Bank of Uganda’s history. He is credited with many of the sound economic policies adopted by the Uganda government at the urging of the central bank during the 1990s and the first decade of the 2000s.