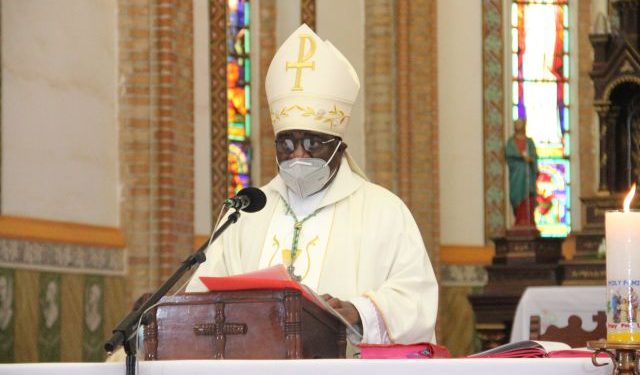 There was excitement and festivity among the Catholic community as thousands thronged Rubaga cathedral yesterday to congratulate Dr. Paul Ssemwogerere upon formally taking office as Archbishop of the Diocese of Kampala.

He was the substantive Bishop of Kasana-Luwero. He is now the caretaker Bishop in Kasana Luwero.

In his initial address yesterday, Ssemwogerere expressed his intent to address the gap between the miserable poor and the rich.

“The continued search for the equitable distribution of wealth. There is nowadays a big gap between the poor, the miserable poor, and the rich. Or should I say the miserable poor and the obscenely rich? The thirst for the culture of accountability and transparency so as to fight corruption,” he said.

The Vice President Jessica Alupo, who represented the Government called for a sense of responsibility on the part of the clergy.

“This involves calling upon the congregation to live according to the biblical teaching and taking a firm stand against evil practices in society such as corruption, segregation, injustices, domestic violence, etc,” she said.

She further hailed the church and its clergy as the moral compass for society.

Buganda Kingdom Premier, Charles Peter Mayiga called for cooperation between the church and the Kingdom.

“When the Kingdom and the church work in cooperation, it will enhance many social benefits to the people we serve, particularly in areas of education, provision of health, services, agriculture and animal husbandry, provision of employment, especially for the youth.

The government presented the Archbishop with a new Toyota Prado vehicle, a move usually presented to other Bishops and traditional leaders.