Who is Brig Gen. Isoke, the new Head of State House Anti-Corruption Unit? 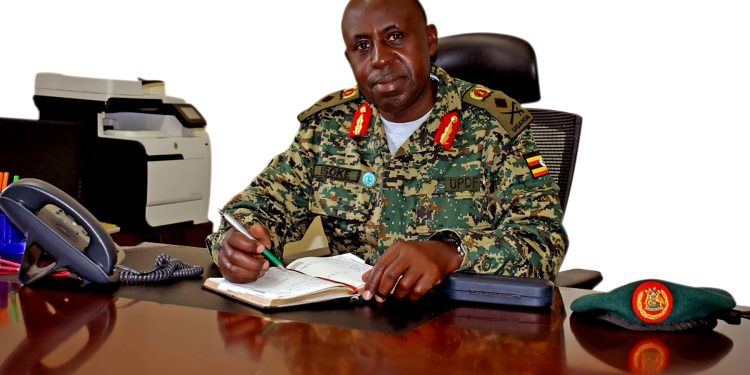 With his Predecessor Col. Edith Nakalema becoming a household name when it comes to fighting corruption in the country, many are wondering if the new Head of State House Anti-Corruption Unit, Brig Gen. Henry Isoke is up to the task ahead of him.

While handing over to Brig Gen Isoke, Nakalema revealed that since inception of the Unit in 2018, she has recovered over Shs32 billion from ‘thieves’ and returned the money to Government.

Who is Brig. Isoke?

He joined the military in October 1986, after graduating from Uganda’s Makerere University. He rose through the ranks and commissioned as second lieutenant in 1991.

Between 1997 and 1998 Brig Isoke operated in the Rwenzori region while fighting the ADF.

During his deployment in Ntoroko/Rwebisengo, Brig Isoke is remembered for curtailing cattle thefts, apprehending notorious cattle thieves and crashing their syndicates.

In 2004, during the UPDF operations against terrorist LRA, Brig Isoke operated in Gulu region as 04 infantry Division Counter Intelligence Officer and later transferred to 03 Division for disarmament operations, inn the Karamoja region.

His personal decorations include AMISOM Medal (2012) and Uganda’s Jubilee Medal (2016).

Brig Isoke has been the Head of Peace Operations Department at the Eastern Africa Standby Force (EASF) Secretariat, Nairobi Kenya, since August 2019.

He was based in the Bundibugyo Zone. He operated in Mogadishu in 2011/2012, under AMISOM, in the fight against Al Shabaab, serving as the overall Intelligence Commander, titled Chief Military Information Officer (CMIO).

In 2004, Brig Isoke was assigned to coordinate with local communities and Uganda Wildlife Authority (UWA) in resolving conflicts over encroachment on Semuliki National Park, in 2 current Ntoroko District. An  assignment that was meticulously executed.

Between 2005 to 2007, Brig Isoke was deployed in Uganda Wildlife Authority (UWA) to oversee security in the national parks and assist strengthen the Law Enforcement department where he built the Special Wildlife and Tourism Protection Force (SWIFT), comprising a UPDF Battalion and UWA Rangers. As a result of the deployment of the SWIFT force, security in Murchison National Park (previously threatened by LRA), Queen Elizabeth National Park and Semliki National Park (under ADF threat) tremendously improved, the number of tourists and the animal population multiplied.

Today the tourism sector is singled as one of Uganda’s largest income earners, contributing about seven percent of Uganda’s gross domestic product (GDP). Before COVID 19 pandemic, tourism employed about 500,000 Ugandans.

AFCON: Here is why Egyptian goalkeeper Gabaski was close to saving penalties against Senegal

AFCON: Here is why Egyptian goalkeeper Gabaski was close to saving penalties against Senegal

Who is Brig Gen. Isoke, the new Head of State House Anti-Corruption Unit?