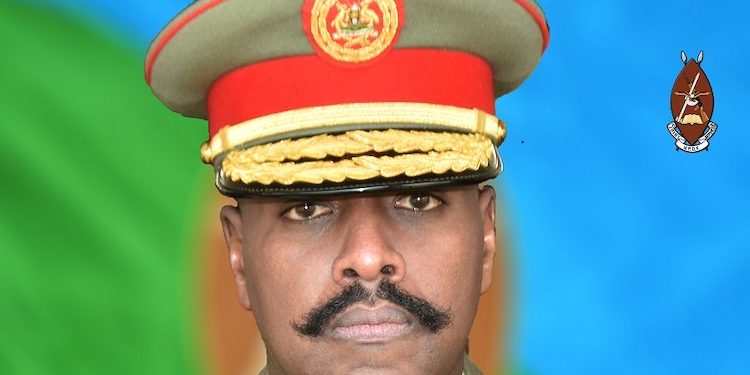 First Son Muhoozi Kainerugaba’s self-praise of being ‘The Tweeting General’ who is massively loved in Uganda and Africa has attracted mixed reactions on the blue app, Twitter.

“I hear people calling me ‘The Tweeting General’ these days. Most of those people are simply cowards! They are terrified of my massive popularity in Uganda and in Africa. Even when I was the most silent officer they used to attack me. The people love me and the revolution!” Muhoozi said in a tweet on Sunday.

But tweeps have mixed reactions to Muhoozi’s sentiments with some praising him while others tweeps came out guns blazing.

Tweep, Mubiru, irked by the sentiments took to Twitter, and sarcastically requested Muhoozi to visit Kisekka Market without guards.

“The people who love you so much have got a request to make. Can you please leave your guards behind and come to the Kisekka market so that we may shower you with love? Please, please!” tweeted Mubiru.

“To be honest to you bro in good faith, apart from a few people from some part of Uganda hyping Muhoozi on social who r also targeting some benefits, central ug is already opposition, go to northern ug or east majority don’t know that M7 has a son,” Nabugodi tweeted.

Olocho Isaac tweeted, “If you want to seriously engage in the politics of Uganda, resign from the army and join the murky waters of politics, be ready for the consequences. Don’t hide behind proxies. Don’t beat around the bush. I never see you tweet about problems of ordinary Ugandans.”

Another tweep, Sulaiman Kasule paused, “Who loves you? The love you buy with money and empty promises!! How many followers do u have? How many does Bobi have? First compare the followers between you and Bobi then we will talk about the rest. Mbu “people” loves!!”

But also, some tweeps showed some love for Muhoozi though they were accused of having ‘eaten’ to influence as majority of those that praised ‘The Tweeting General’ displayed photos of themselves donning t-shits that have Muhoozi picture.

Below are some of the tweets supporting Muhoozi;