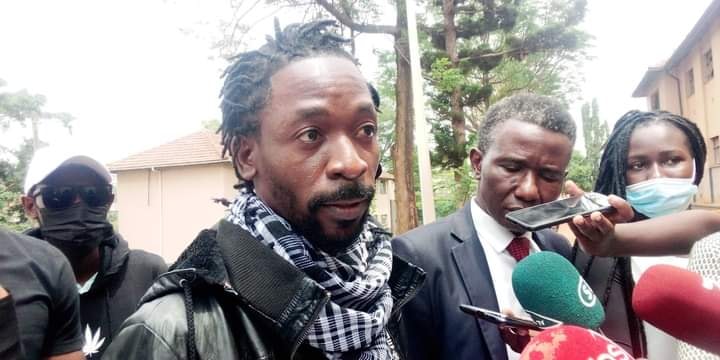 City lawyer Isaac Ssemakadde and his team of lawyers have arrived at the Police CID headquarters in Kibuli, Kampala where he was summoned to appear today for alleged offensive communication against Justice Musa Ssekaana.

Ssemakadde was quick to make a couple of analogies to shed light on the incompetence of the justice system.

Likewise, judges are not justice, they are merely appointed to the task of delivering it. We want to respect them for that and correct them when they fail to live up to the task. A judge does not own court orders, he or she merely issues them in the name of the people and on behalf of the demands of justice,” said Ssemakadde.

The lawyer also launched a barrage of blows on the justice system and the system.

“Now why are we gathered here today? We are here to expose a collective failure of several generations of lawmakers, law administrators, and law practitioners, a failure to detect the lasting impacts of colonialism, the defects of colonial culture in our administration of justice.

A judge has been made to believe that he is the justice system and that an attack on him is an attack on the system. That the system becomes weak because he is weak. That’s a joke. That only he therefore can step forward as I am made to believe came here to report a very personalized case of offensive communication. My lawyers have informed me what the ingredients are. The disturbance of his peace, privacy, quiet as a person,” he said.

The Criminal Investigations Directorate of Police (CID) on February 22 summoned the maverick lawyer to record a statement on allegations of attacking justice Ssekaana Musa.

However, according to Ssemakadde, Ssekaana is a freshman judge with a lot of fussiness and summoned his older colleagues to warn him to go slow against paragons of the rule of law.

IN PICTURES: Highlights from Roast And Rhyme