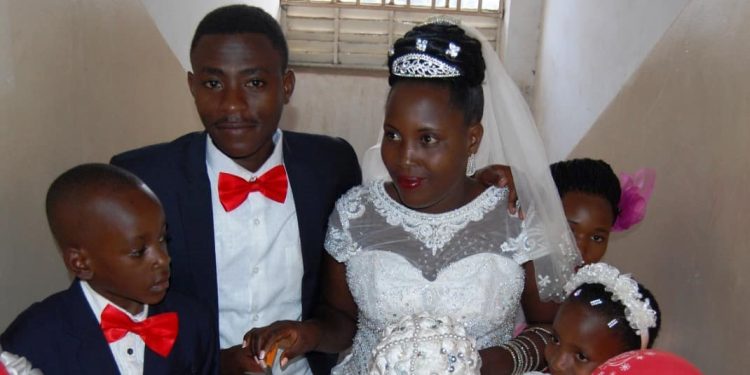 “You know our love was meant to be,” Fred Mwebembezi, a journalist at Voice of Toro FM, and Monicah Kyomugisha, a teacher at Good Shepherd Primary School in Kamwenge District, started out as friends and later grew to love each other intimately.

According to a story run by popular wedding website, mywedding.co.ug, Fred Mwebembezi, and Monicah Kyomugisha had their wedding on December 7, 2019, at Kyabenda Archdeaconry Church of Uganda in Kamwenge District.

Before tying the knot, Fred and Monicah had spent half a year in a relationship, but they had been hard-pressed by the thought of legalizing their relationship. Fred says he met Monicah in July 2018 and they struck up a friendship later. In January 2019, she went to meet him for the third time at a restaurant in Fort Portal.

“Before we became close friends, she would spend a few hours with me and return home because at that time our relationship was not official,” he says.
Fred says after accepting the wedding plan, they started planning.

“When I went for kukyaala, I was open to her parents. I asked them not to make high demands in terms of bride price. They obliged, and most of my in-laws liked me, so it became easy for us to plan for the wedding and introduction, “she says.

He believes that he paid Shs6m for the bride price because her family loved him so much.

“Because my wife contributed some money for both the wedding and the introduction, I never wanted to disturb my guests. I paid the balance for dowry on the day of introduction,” he says.

Their introduction took place on December 6, 2021, while the wedding happened the next day.

“After setting our dates for the introduction and wedding, we agreed to save some money, and within a few months, we had raised some money. My wife was optimistic and agreed to the plan. I thank her for that, “he says.

He says her family injected some money to make the introduction party colorful. I was only asked to contribute to buying meat and a few drinks.

Their initial budget for the introduction and wedding was Shs23m but was revised to Shs16m because, initially, Fred had planned to be the sole financier of the entire budget.

He says later, Monicah’s parents also paid for some items on the budget.

“She paid for her wedding and changed gowns and decorations. Other items on their budget were paid for by her parents, which reduced our expenditure,” he says.

The couple’s respective parents held meetings in their home villages to raise more money to support the marriage ceremonies.

He says at first he had decided to have their reception at his home in Rubingo, Ruhaama County, Ntungamo District but later changed plans and hired a venue in Fort Portal City.

“My home district is far away and I realized that our wedding in Ntungamo would not allow for the majority of our friends in Fort Portal to attend,” Fred says, adding that he settled for transporting their guests to Fort Portal.