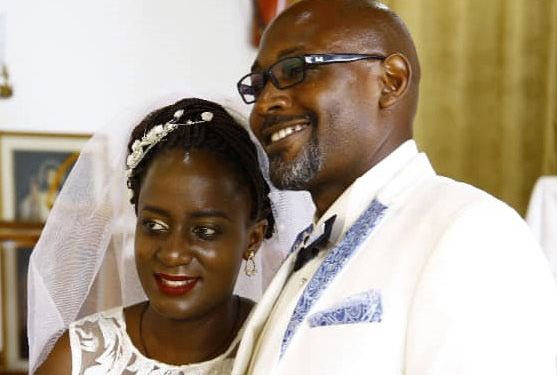 During the outbreak of the coronavirus pandemic, President Museveni gave a directive stating that a maximum number of 20 people would be acceptable for scientific weddings to take place.

Among the people who followed the president’s orders were Herbert Kafrika, a filmmaker, screen actor, swimming and squash instructor, and his wife, Rose Namuddu, a salesperson, who got married on April 18, 2021, and their wedding budget was Shs1 million.

According to a story they shared with the Daily Monitor, Herbert met Rose through a friend seven years ago and the two liked each other.

When Kafrika was asked what convinced him that Rose was the woman to commit to, he replied that based on the few female friends he had met and dated, Rose stood out because of her confidence, kindness, and prayerfulness. Those traits swept him off his feet.

“She has been through thick and thin with me. We have toiled together, loudly and silently. She has paid bills for me when I was low and taken care of me when I was ill. She’s such a sweet person,” Kafrika said while disclosing some of the acts of kindness Rose has shown him.

When Rose was asked how Kafrika proposed to her, she disclosed stating, “Well, he woke up on the 16th of September 2019 and told me he wanted to meet my Senga (aunt). I didn’t believe him so I kept asking him if he meant what he was saying. He said he meant it. And here we are, married.”

Kafrika notes that he was blessed with a dream team. First is God, then his friends who stood by him and also chaired their meetings in the tough Covid-19 times.
The couple also shared their feelings about being married during the Covid-19 times saying they feel blessed and happy because it’s God’s will and mercy for them to get married at this time.

The couple also revealed that their wedding happened during the lockdown and that it was attended by 10 guests because they had to follow the President’s order for scientific weddings.

“Of the 10 people who attended, were Father Mathias Nteza, me, my husband, my father, my mother-in-law, my sister-in-law, my brother, matron, best man, and his wife as a witness,” Rose said.

According to Kafrika, the couple spent only Shs1m on their big day.

“All in all, I parted with Shs1m for all clearance. I had to hire another gown for the bride because the one we had banked on was locked in someone’s shop. Then I had to spend on make-up, hair, fuel, photo and videography services,” Kafrika.

The couple who reside in Kirinya-Bukasa also shared with other couples about managing expenses in the name of holding a wedding saying, “Do what’s necessary or what will please you and not what pleases others because you can’t please everybody.”

They added that couples should do what is within their means because, at the end of the day, it all rounds up to husband and wife.

“The rest won’t be there when you are stressed with debts after the wedding; they may even be laughing behind your backs. Couples should always put God first in everything, especially their wedding preparations and marriage,” Rose said.