Ugandans are not drinking enough beer, which is affecting the economy- Ministry of Finance report 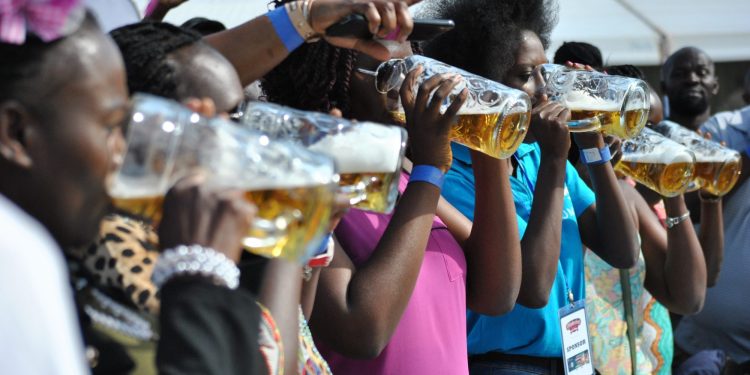 According to a new report by the Ministry of Finance, Ugandans are not drinking enough beer.

This is after the Ministry revealed a drop in the consumption of beer, spirits, wines, and non-beer beverages, which consequently caused a deficit in excise duty collection during February.

Ugandans consumed less alcohol than what the Ministry had anticipated in terms of beers, wines, spirits, and non-beer beverages.

In details published by The Daily Monitor newspaper, the Ministry of Finance noted in its February report that tax collections were lower than targets due to shortfalls in excise duty and value-added tax (VAT) resulting from challenges in the proper implementation of some digital tracking systems and difficulties encountered in the roll-out of the electronic fiscal receipting and invoicing system.

During the period, both tax revenue and grants were lower than targeted realizing Shs1,672 trillion against the planned Shs1.836 trillion.

Tax revenues stood at Shs1.54 trillion, which was lower than the targeted Shs1.63 trillion while grants registered a Shs96.29 shortfall.

During that period, the Ministry of Finance indicated that domestic revenue collections stood at Shs1.662 trillion against the planned target of Shs1.73 trillion due to a shortfall in both tax and non-tax collections. However, the Ministry of Finance, indicated that despite a pickup in economic activity, tax collections continue to perform below the target because “some of the administrative tax measures proposed in the budget for the financial year have not been effectively implemented as earlier anticipated.”

Positions are not the most important thing, says Museveni