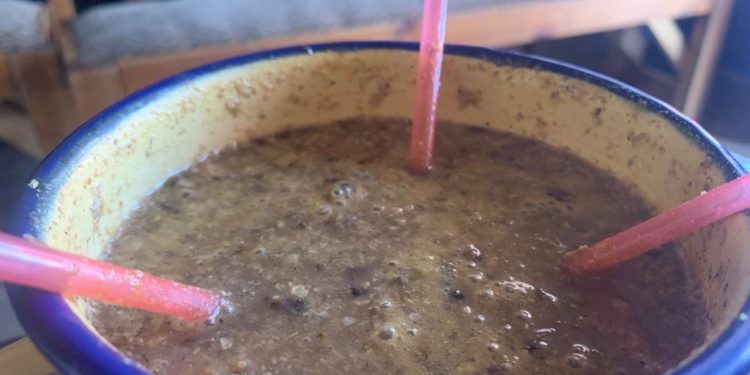 If you have ever visited a real Mukiga’s home, chances are high that your taste buds have interacted with ‘Enturire’ – a porridge made from fermented sorghum.

If you haven’t tasted this brew, however, your chances of enjoying this experience grow slim daily due to climate change.

In a revealing documentary by Shemei Agabo, a filmmaker who recently joined the climate change storytelling platform, Last Drop Africa, more than 90% of the households in Kabale district are finding it harder to grow sorghum – the most grown cereal crop in Kigezi region.

As a result, sorghum production has nosedived according to the 2022 Kabale District’s Third Development Plan (2020-2025), affecting incomes of hundreds of farmers, especially women.

“The causes of poor living standards in the District include climate change and soil exhaustion which cause dwindling yields year after year,” the report reads.

The documentary maker, Agabo, a student at Aga Khan University’s Graduate School of Media and Communications (GSMC), told Matooke Republic that women and the rural poor, who constitute the majority of the population in the district, are the most vulnerable to climate changes.

“The rural poor derive a significant fraction of their total income from the environmental ecosystem. This ecosystem provides the foundation for all human survival since it produces the food, air, soil, and other material supports for life,” he noted.

The ‘Enturire’ documentary follows the lives of Milion Oworinawe, a sorghum farmer and Alice Asiimwe, a businesswoman who has been dealing in the Entutire brew for over 30 years.

In 19 minutes, the duo decries harsh climatic conditions that deprived them of their household incomes and distorted the quality of the drink itself by making it hard for superior sorghum varieties such as ‘Kyaatanombe’ and ‘Buhuri’ – the unrivalled ingredients for the mouth-watering drink.

On a quarter an acre of land, Oworinawe used to harvest about 300 kilograms of quality sorghum, but this has not been possible in the last five or so years due to increased temperatures in the district. She has since resorted to Irish potatoes and beans, which require a high fertiliser input and often bring in much less income.

Despite the climate threats, scientists and researchers are mooting solutions to save the endangered sorghum species by tweaking their genealogy to make them more resilient and adaptive to the change in weather patterns.

Dr. Richard Edema, the Director of Makerere University’s Regional Centre for Crop Improvement, gave assurances that improved variations of the ‘Kyaatanombe’ sorghum variety in less than five years, among other breeds, will be available for planting, giving farmers in Kabale and the country at large a renewed lifeline.

Besides Enturire, Alex Taremwa, the Co-Founder of Last Drop Africa, noted that sorghum is a key ingredient of several alcoholic products, especially beer brands, warning that a decline in production spells long-term consequences for Ugandans.

“A shortage in the supply of this raw material signals an increase in prices for your favourite cold one and an influx of imported beers that further threaten local production, jobs and cultural identity,” he added.

The documentary premieres today, April 5, 2022, at the French Ambassador’s Residence in Kampala. It was a collaborative project supported by the COP-21 Anniversary Grant from the Embassy of France in Uganda and partnerships from non-governmental organisations; Last Drop Africa and InfoNile.