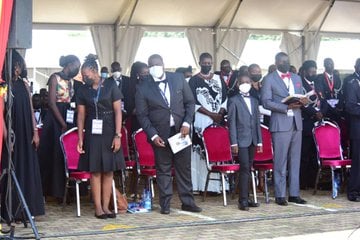 The Speaker of Parliament, Anita Among, has tasked legislators from northern Uganda to make Andrew Ojok, the son of the fallen Speaker Jacob Oulanyah, the new Omoro County MP.

The former Speaker died on March 20 in Seattle, US where he was airlifted in February for medical care. He will be buried this Friday in Omoro. He was 56.

While addressing mourners at the vigil at Oulanyah’s home in Muyenga, Kampala on Monday, Anthony Akol, the head of the Acholi Parliamentary Committee, said: “I have been given responsibilities by the Speaker of Parliament who is newly elected to make sure that one of the family members should be the next Member of Parliament. I think I will deliver that. In Luo culture, if someone has given birth to a child, he is not dead so Jacob is not dead.”

At the same function, Betty Amongi, the Oyam South MP and Gender minister, asked Ojok to start preparing himself for the race to replace his father.

“The Speaker of Parliament called me and said ‘you people that are close, work very hard to make sure you build consensus so that we have that boy’. I will be in Minakulu, and Minakulu to Omoro is a 10-to-20-minute drive and we shall deliver you. From today onward begin to package yourself for politics,” she said.

The family of Oulanyah had previously hinted at fronting either Ojok or Denis Okori, another child of Oulanyah and Katakwi deputy Resident District Commissioner, to take over their father’s position as Omoro County MP.

According to the family, the former Speaker had several plans not only for the constituency but for Omoro District and the northern region that he had yet to fulfill, and they believe that a successor from their family is best placed to fulfill them.

Former Journalist hands himself to police after murdering lover