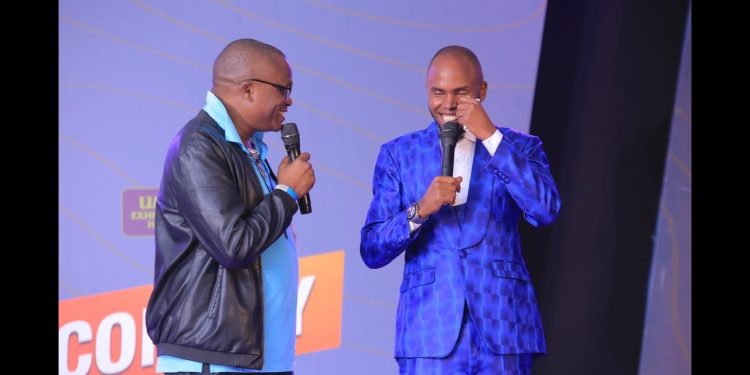 Yesterday, it was not only laughter at a popular city nightspot, Level’s Lounge, during their “Stress Clinic” comedy night, as it was also tears of joy as comedians Alex Muhangi and MC Kapale mended fences over their previous feuds.

The comedians fell out earlier at the beginning of the COVID pandemic, as Alex Muhangi no longer enlisted MC Kapale’s services for his popular Comedy Store, where he used to be a regular.

According to Muhangi, Kapale needed to clean up his content as it was no longer deemed fit for his audience.

This led to a verbal brawl between the two entertainers as their split ended in a hostile exchange of words.

Nevertheless, the two comedians denounced their rivalry at Levels lounge yesterday, putting their past behind them.

In a gesture of goodwill, Alex Muhangi tipped MC Kapale with Shs50,000 as a tip for the new bridges being rebuilt.

MC Kapale and Alex Muhangi are two of the country’s most seasoned comedians who have invested immense effort to ensure that the industry stays afloat.

VIDEO: Man’s head turns into a pig’s head after stealing a pig

Juliana Kanyomozi returns to the stage at Baileys Picnic

Juliana Kanyomozi returns to the stage at Baileys Picnic