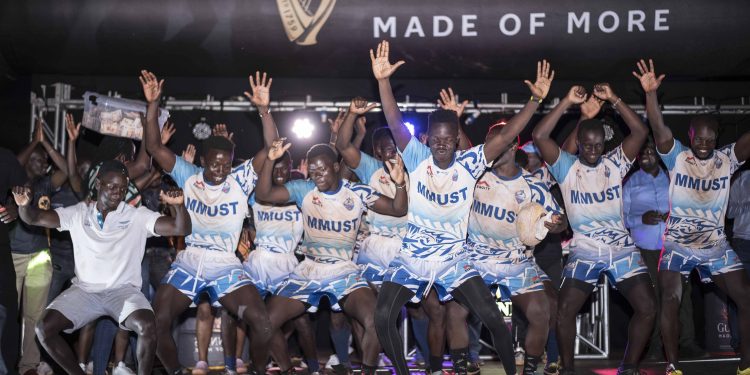 The game of rugby was on Good Friday brought to life at Dam Waters in Jinja when the Jinja Fun Rugby Sevens Festival made a return for its 17th edition.

The day that was designed for rugby funs to unwind, play some rugby and have fun did not disappoint as it offered both sport and crazy fun fare throughout the day. The annual Rugby Sevens Festival saw 19 Men’s teams and eight Women’s teams from both Kenya and Uganda take to the pitch to have a go at the winning trophy and the cash prize.

Kenya’s MMUST ( Makaka) team all the way from Kakamega walked away with the Men’s trophy and a cash prize of One Million after beating the Jinja Hippos ( Street Bulls) 7- 5 in the Men’s final to seal their spot as the champions of the 17th edition while the Women’s title was taken by the Amazon team from Kings Park in Bweyogorere who beat Jinja Ripples 22- 5 in the women’s finale.

Later on in the evening, a performance by dancehall artist, Cindy and Guinness’ abundant flow and presence ushered in the Easter weekend in style as revellers shared light-hearted unforgettable moments. The King herself took revellers on a musical ride of their lives with crazy performances of some of her biggest hits with songs like ‘Run this City’, ‘Boom Party’ ‘Ndi Mukodo’ among others.

Speaking at the festival, UBLs’ Regional Sales Manager, Eastern Region, Doreen Mistika Adoch, Jinja, spoke of Guinness’ commitment to the game of rugby as a game enjoyed by the brand’s consumers.

“Guinness Uganda is synonymous with sports, particularly rugby and football, and the Jinja Fun Rugby festival not only offers rugby, it also offers fun moments with friends and family, something we strive to bring to our consumers. This has been one of the many tournaments that we are going to be a part of, “said Adoch.

While speaking to the press at the event ,Dr Gilbert Bayena, Chairman of Nile Rugby Club in Jinja ,one of the organisers spoke to the intention of the festival and what it stands for.

“ The Jinja Fun Rugby Sevens Festival is meant to demystify and popularise the game of rugby around the country and its something we have aimed to achieve for the last sixteen editions, I am so happy that we now have Guinness on board. We can do more from now on,” said Bayena.

The Jinja Fun Rugby Festival is an annual rugby tournament that has been in existence since 2003. The tournament is held under the Sevens rugby format and rules.