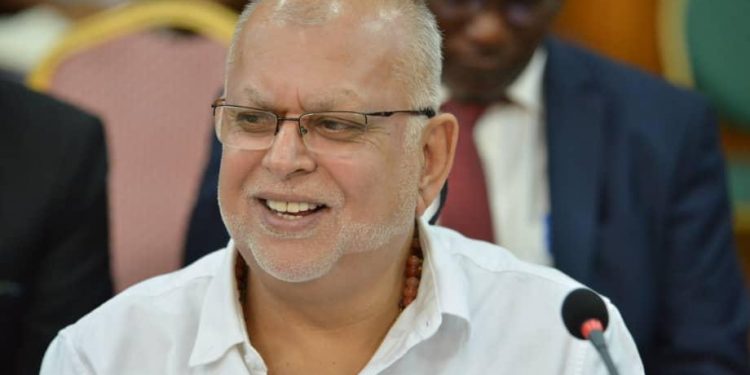 Kampala’s biggest property developer Dr. Sudhir Ruparelia has asked Parliament’s Adhoc Committee investigating irregularities in the sale and give-away of Nakawa Naguru land to increase the acreage he was given from three to 10 acres that he applied for.

“My humble request for this committee is to help us get the 10 acres we originally applied for. They have allocated land to people that do not exist, so what is wrong with me getting 10 acres?” Sudhir told the committee that is headed by Hon. Dan Kimosho.

When the committee members asked Sudhir to mention those companies that were allocated land but don’t exist, the business magnate replied; “I was expecting you to say we will try our best to make sure you get the 10 acres.”

The Nakawa-Naguru land has been controversial as it was first given to Opec Prime Properties and repossessed by government after the company failed to develop it.

Several investors have now been reallocated the land through applications and presidential directives but the manner has been queried with allegations that some of the land was going to ghost companies fronted by powerful people in government.

While Sudhir didn’t mention names and stuck to his request of being allocated land as per his development plans, the Chairperson of the Uganda Land Commission, Beatrice Nyakaisiki Byenkya, didn’t mince words when she appeared before the committee earlier last week, when she said that politicians and ministers were using pseudo companies to allocate themselves the prime land.

Nyakaisiki didn’t name the individuals but she told the committee that she would do so, during a closed session without press cameras.

However, she noted that Internal Medicine of Virginia, a company which was allocated 15 acres of the land by President Museveni to construct a modern hospital is non-existent. While appearing before the committee, Nyakaisiki revealed that during her tenure in office, she was unable to identify the directors of this company.

She said a one Farouk, a businessman from Mbarara claimed to be the contact person of the company and by the time she left office in January this year, when she was interdicted for obstruction of search and abuse of office, the company’s ownership  had not been fully established..

However appearing before the same committee yesterday, former State Minister for Lands Persis Namuganza vouched for the company saying she followed a Presidential Order.

In Museveni’s letter, he said that the directors of Internal Medicine of Virginia are doctors who were children of Ugandans of Arab origin who operated in Mbarara in the 1960s.

“I have referred you to executive power. When the President tells you that I interacted with these people, they were my colleagues long time ago. I have tasked them to come and construct a hospital, then you want me as a minister to tell the president, look, they don’t have money in Uganda … you people…” Namuganza told the committee.

The probe is ongoing with several beneficiaries queried on how they acquired tired to the land.