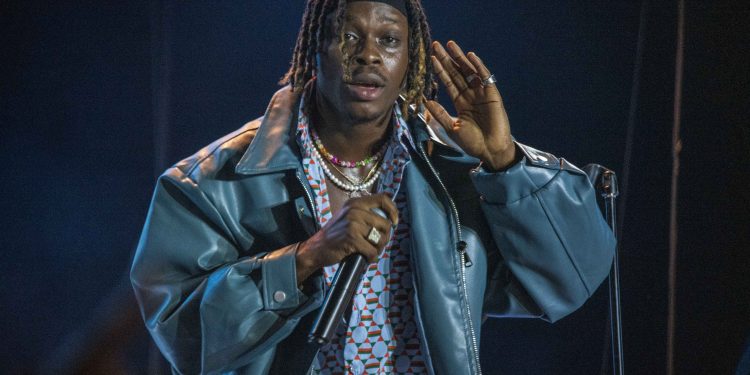 All roads led to the cricket Oval on Saturday night as Ugandans flocked the Lugogo based venue to catch a glimpse of Nigerian RnB superstar Fireboy DML who was in the country for his maiden concert in the Pearl of Africa.

And thanks to his extensive catalogue of hit songs like ‘Peru’, the Guinness Black Shines Brightest pan African influencer did not disappoint, throwing a showstopping performance that gave Kampala revellers the definition of a party after a long time without massive concerts at the oval.

Guinness the sponsors of the show did not leave anything to chance. Everything was planned to detail to deliver the “show of the year.”
In between the musical performances, several DJs including Spinny, Slick Stuart & Roja, Fem DJ and Masaka’s own DJ Suuna Ben kept the crowds on their feet.

Starting the day with rapper Fik Famica and Zex Bilangilangi, revellers had no idea of what awaited them in store. As the night progressed, they were given a dose of hip-hop from Navio and a taste of Sheebah Karungi the queen herself whose riveting performance left the crowd of revellers on their feet.

No sooner had she left the stage than Fireboy appeared on stage in all his glory. Starting off with the people’s old-time favorites like ‘Vibration’, ‘Champion’, ‘Energy’, ‘Jealous’, ‘High on life’ among others.

However, it was his famous ‘Peru’ a song he remixed in collaboration with Ed Shereen that got revellers wild and going crazy over his performance.
“Uganda thank you for welcoming me,” he shouted in between his performances an act that increased the excitement and got revellers engaged with the star throughout the show.

Revellers where also given a taste of the Guinness Bright House experience which included an engagement in Guinness flavour rooms that saw revellers explore the Guinness liquid.

Having set out to deliver a memorable experience, Guinness Brand Manager Prudence Mutembei had nothing but appreciation for how the event turned out.

“I cannot tell you how proud we are as UBL and particularly Guinness for how this has culminated. For us the big one is that we gave our consumers quite an experience and a sneak peak into what to expect at the Guinness Bright Houses that we are soon rolling out,” said Mutembei.