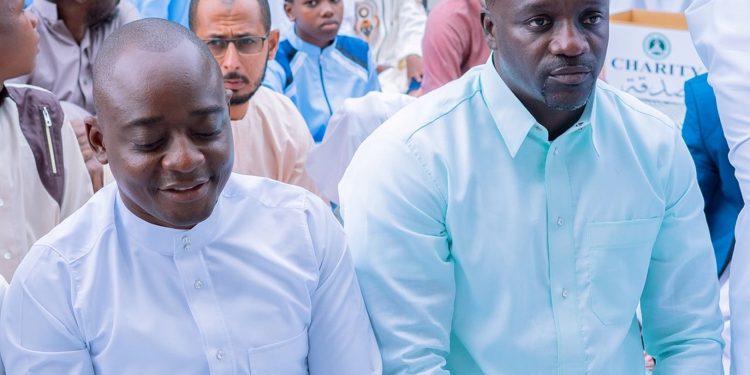 Over the weekend, good sections of Ugandans were surprised to know that celebrated international music icon Akon was in Uganda as his visit did not dominate the news headlines as it has been the case in his previous visits.

Akon’s surprise visit to Uganda left many wondering what he was up to this time.

Young tycoon, Hamis Kiggundu has claimed that he’s the reason Akon is back in Uganda.

“I feel so grateful, honoured and humbled by my brothers Akon and Babs Hussein who flew all the way from the United States of America to Uganda simply to pray and celebrate Eid with me and my family…..Alhamudulillah…..for God and my country,” said Hamis through his known social media platform.

Meanwhile, the two are said to be discussing a business partnership for the near future.

In January of this year, Akon and Hamis linked up in the United Arab Emirates at the Uganda stall at the Dubai Expo. The duo shared photo moments.

Meanwhile, Akon has an ambitious plan to build Akon City in Uganda. He is yet to start on the project despite the government’s confirming having allocated land for him in Mukono district. Meanwhile, the singer is also yet to begin the construction of “Akon City” in his native country, Senegal. In 2020, he laid the first stone, but the site remains grassland. The first phase of the project was supposed to be completed by 2023.