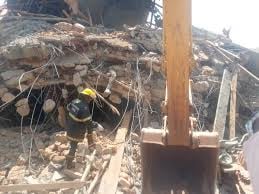 A building has collapsed in Ndejje Milimu today at around 8 a.m. and some people have allegedly been trapped in the rubble.

In a short statement released by Luke Owoyesigyire, the deputy Kampala Metropolitan spokesperson, he said that the fire prevention and rescue services working with the police at Katwe are already at the scene.

“We have responded to an incident where a storey building in Ndejje Milimu has collapsed. The allegation is that some people are trapped inside.”

We shall be updating you on the progress of the rescue efforts that are taking place,” said Owoyesigyire.

This is a developing story.

From Shs50k to Shs500k! Gov’t reveals reason for the proposed increase in fees for changing birth dates on national IDs