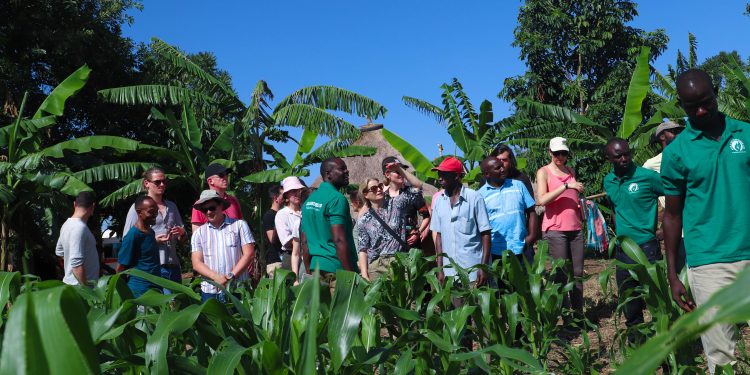 Yunus Social Business Foundation Uganda hosted a group of investors from Europe, Brazil, and Mexico for a three-day field visit to Mukono and Soroti from May 9th to May 11th, 2022, after two years of lockdown.

The purpose of the visit was to assess the progress of the social businesses that had received funding in the form of loans from Yunus Social Business Foundation.

A total of three (3) social businesses were visited, and these were Green BioEnergy in Mukono, Acila Enterprises Ltd, and Eastern Agricultural Development Company Ltd (EADC) in Soroti district.

Social businesses in nature are set up to solve urgent human problems like wealth inequality, lack of access to education, and the climate crisis.

In the last three days, the social businesses visited by the investors sought to address such problems in the communities in which they operate. For example, Green Bio Energy (GBE) was set up to offer low-income Ugandan families access to cost-saving, safe and eco-friendly energy solutions such as charcoal briquettes.

Speaking during the visit, Saskia Bruysten, the CEO and Co-Founder of Yunus Social Business Foundation, commended the social business owners on their resilience and passion for ensuring the success of their businesses amidst the challenges over the last two years.

“I am often moved by the drive and resilience of the social business owners when I hear their stories. I am therefore glad that the rest of the team has taken this journey with me to Uganda to see what I often talk about,” Saskia added.

Robert Zziwa, the CEO of GBE, highlighted that poverty is a mindset that engulfs most people in Uganda; therefore, finding someone who can show you the possibility is significant. That is the journey YSB, as our impact funder walks with us through provision of affordable and appropriately structured loans.

Richard Tugume Tulyahikayo, the Country Director for Yunus Social Business Foundation Uganda, highlighted the need for impact investors in Uganda as a country that is heavily reliant on an agricultural economy.

“Agriculture employs at least 73% of our population, 75% of our population is below the age of 25, and yet, the agricultural sector has a 75% financing deficit from established channels.” This is the gap YSB, in partnership with other development partners and impact investment funds, tries to bridge,” said Richard.

Acila Enterprises Limited, based in Soroti district, is another social business visited by the YSB team.

The enterprise was founded by Ruth Okiror in 1996 and has since grown its smallholder farmers network to 9,000 located in the Teso and Karamoja regions who grow maize, sorghum, soybean and beans.

Farmers who have benefited from the services offered by Acila Enterprises urged the YSB team to continue supporting the enterprise because it has changed their lives.

“I used to grow maize, but I had nowhere to sell my produce. Since I started working with Acila Enterprises, I am always assured of a market for my produce. My children are now going to school,” explained Alex Epijong (a farmer in Serere district).

Sheila Alumo, the founder of Eastern Agricultural Development Company Ltd (EADC), applauded YSB for believing in them despite the uniqueness of their social business that seeks to solve the problem of malnutrition which is prevalent in the Eastern region.

“EADC deals in processing and trading super-rich bio-fortified foods such as orange-fleshed sweet potatoes, high iron and zinc-rich precooked beans with a social development aim to increase farmers’ incomes. The idea of precooked beans is still new to the market, but YSB believed in us and gave us a loan last year,” Sheila concluded.