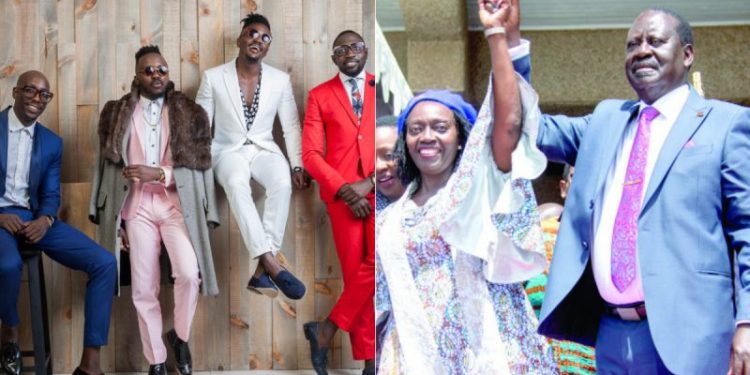 In a statement issued on Monday, Sauti Sol accused the Raila Odinga-led Azimio of using one of their songs, Extravaganza, as a soundtrack during the unveiling of Martha Karua, Odinga’s running mate.

Sauti Sol claimed that the action taken by Azimio’s campaign team infringed on their right to property.

“It has come to our attention that the Azimio la Umoja campaign have without license nor authority used one of our more popular original compositions, “Extravaganza,” as a soundtrack to the announcement post of the running mate,” reads the statement in part.

It adds, “We are disappointed by the Azimio la Umoja Campaign’s blatant disregard of our right to control the use of our copyright. We shall be seeking legal remedy for this clear violation of our copyright.”

Responding to the attempted legal suit, Odinga, through his party – the Orange Democratic Movement (ODM) – argued that playing the song was a show of love to the music group.

However, the Music Copyright Society of Kenya (MCSK) CEO Ezekiel Mutua said Odinga’s campaign team obtained all necessary licenses to play both local and international music in their campaign shows.

I wasn’t raped,” Sheebah speaks out after recording statement at CID

I wasn't raped," Sheebah speaks out after recording statement at CID