Youth in Katwe to receive training in street art 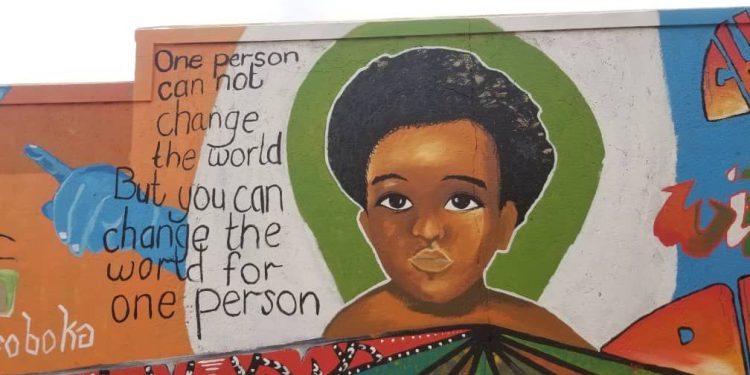 Feed a Million Mouths International (FAMMI) – a social enterprise based in Uganda – has launched the “Kartwe Street Art Project” in the Katwe area of Kampala to impart art skills to underprivileged children and youth and transform the community through public art.

The project will see hundreds of children and youth from within Katwe undergo three art workshops every Saturday for the next 10 weeks, at the end of which they will hold an exhibition and take part in a competition in which the five best street art designs will be realized in the community.

While speaking at the launch held at Central Primary School in Katwe, Mark Montgomery, the Director of FAMMI, said, “We believe that the people, especially the children of Katwe, need a chance to live with and grow up with hope, dignity, and a platform for their creativity, and that by introducing art, colour, and beauty into the community, we can change the way people think of and relationship with their surroundings.”

Katwe—once a thriving informal settlement for mostly artisans, craftsmen, technicians, and entrepreneurs—has since become an incubation chamber for crime, disease, and poverty, and is home to a large number of street children.

According to the Police Annual Crime Report for 2020, Katwe is one of Uganda’s leading divisions in crime, registering a total of 2,797 cases during that year.

Public art has been used elsewhere in the world to impact individual lives, transform public spaces and ignite change, for example, “Boy With Kite” – a 150 square meter mural in one of Rio de Janeiro’s favelas – which was painted alongside local youth who were offered an alternative life away from crime and drug gangs.

Through the Kartwe Street Art Project, FAMMI also aims to inspire the community to maintain cleanliness towards alleviating diseases like tetanus and typhoid.

Additionally, throughout the art workshops, FAMMI will help address hunger and malnutrition by feeding children from low-income families with their maize and soy-based porridge – an immune-boosting supplement that provides 100% of the recommended daily allowance of vitamins and minerals and acts as a meal replacement.

Montgomery added, “We are feeding the mind, the body, and the soul. We are telling these children that they are creative, they have value and we believe that they can achieve excellence.”

Sheebah revealed the man who assaulted her, says Police

Kampala businessman dies on flight from Dubai to Entebbe

Kampala businessman dies on flight from Dubai to Entebbe

Youth in Katwe to receive training in street art