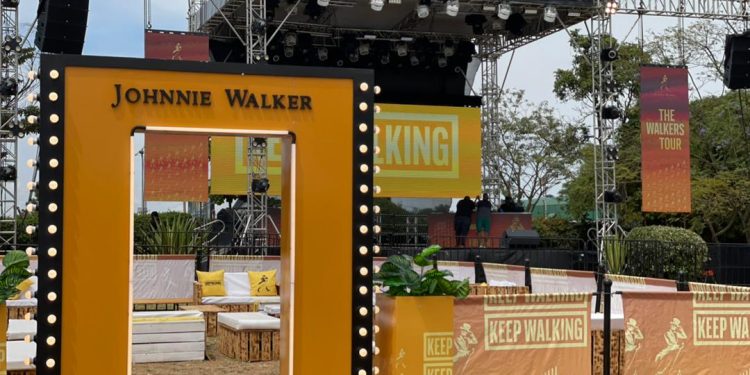 Mbarara City has witnessed a series of unusual activities since yesterday (Friday, May 20), thanks to Johnnie Walker.

The city is the first upcountry location to host the new Johnnie Walker Walkers Campaign due tonight at Agip Motel grounds. And as a precursor to the event, a team from Uganda Breweries Limited, the  Johnnie Walker franchise holder in the country, took to the streets of Mbarara and made processions that had city residents conclude that “Johnnie Walker had taken over the city”.

The procession which included UBL employees, brand partners, including the new Walkers that are led by rapper Navio, caused a stir as city dwellers were captivated most by the iconic Johnnie Walker striding man that had been strategically stationed next to the famous cow statue which welcomes visitors to the land of milk and honey. The striding man has also moved around and was stationed at the entrances of different hangouts in Mbarara on Friday night.

Earlier today, the group made another procession around Mbarara town that lasted about four hours as they announced the Walkers tour event.

The tour is part of the recently launched ‘To the Ones Who’ campaign; a movement aimed at celebrating and highlighting the everyday steps and leaps that the youth today have taken and keep taking in their bid to change and shift in culture.

The event which kicks off at 5pm, will be characterized by performances by ‘National Walker’ Navio, dancehall star Karole Kasita, Ray G and a selection of leading Mbarara entertainers.

Celebrated Mbarara media personality and events host, MC Kacheche, who is part of the Western Uganda Walkers, expressed gratitude to UBL for taking the bold step to shine a light on the efforts of the youth in Mbarara and all over the country.

“I cannot tell you how happy I am that a brand like Johnnie Walker is celebrating outstanding youth across the country.

“I want to thank them in a special way, for choosing me and others, but most importantly for picking Mbarara to host the first upcountry Walkers edition,” said Kacheche.

Access to the event is by purchasing a bottle of Johnnie Walker Pocket Scotch. A Red Label will be going for Shs15k and comes with one ticket, while a Black Label will be at Shs23k, and will come with two tickets to the show.