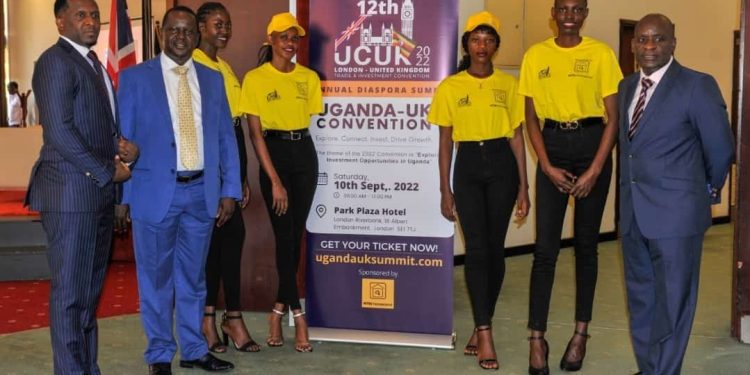 The 12th UK-Uganda Trade and Investment Convention (UCUK) was launched on Friday at Serena Hotel in Kampala.

The annual event is scheduled to take place on September 10, 2022, at Park Plaza London Riverbank, the United Kingdom, under the theme “Explore Investment Opportunities in Uganda”.

It will bring together Ugandans in the diaspora, experts, the business community, professionals, and organizations in Uganda, the UK, and beyond to explore opportunities in Uganda.

“The convention is one important catalytic factor for trade and investment between the UK and Uganda. Ugandans have the opportunity to Innovate products and services that ably compete at global standards. Attracting British investments is critically important at this stage of our economic growth,” Edwin Musiime, the UK Convention Ambassador, says.

Last year, the convention, which took place virtually, was officiated by the Prime Minister, the Honorable Robinah Nabbanja.

It was also attended by over 500 professionals, government officials, diasporas, and business communities from all over the world.

The event was also graced by Lord Dolar Popat, UK trade envoy to Uganda, Rwanda, and the Democratic Republic of Congo, Uganda’s High Commissioner to the UK and Ireland, and Ambassador Julius Peter Moto, among others.

EC clears candidates for Omoro by-election to continue with campaigns

EC clears candidates for Omoro by-election to continue with campaigns