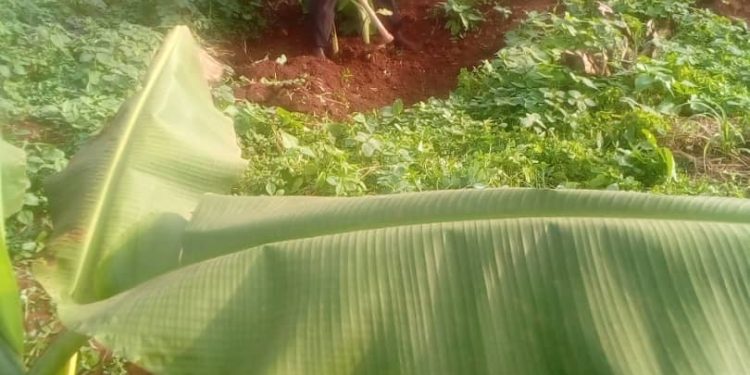 The suspect was arrested following the disappearance of Twinomujuni Prossy, 28, a resident of Kawafu cell, Nkumba Parish, Katabi Town Council in Wakiso District.

The disappearance was reported by Twinomujuni’s husband on December 7, 2021.

Police say that the suspect told detectives where the body of the deceased was.

Yesterday, June 23, 2022, he led Flying Squad Unit operatives and detectives to his workplace in Bukolwa village, Nkumba Parish, Katabi Town Council in Wakiso District, where the body was buried.

The suspect had buried the victim in the piggery farm, “said Luke Owoyesigyire, the Kampala Metropolitan deputy spokesperson.

Owoyesigyire explained that the decomposing body of Twinomujuni was found buried in a white polythene bag.

The suspect also led the police to the farmhouse, where a hammer suspected to have been used in the murder was recovered.

He said a hoe, which was used to dig the grave, was also recovered and has been exhibited.

The body of the deceased was taken to the city mortuary at Mulago for a post-mortem.

The suspect has been detained at Nateete Police Station as investigations continue.

“The motive of the murder will be communicated in due course,” said Owoyesigyire.