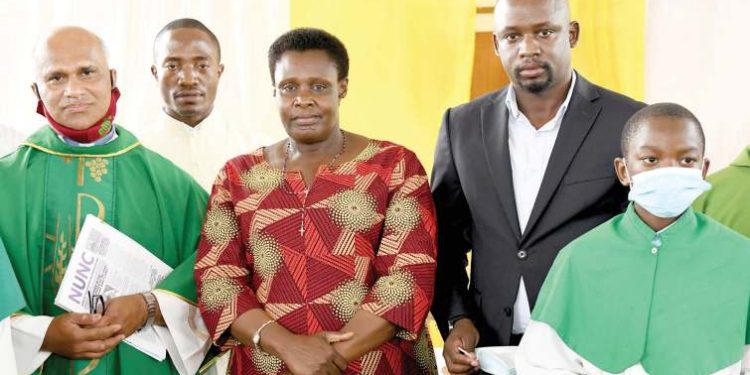 Early this year, rumours of vice president Alupo’s secret introduction to a one Abeine made rounds on different tabloids which got the public talking with many speculations on who the lucky chap could be and whether it was true that the country’s second in command was actually married.

However yesterday those rumours were put to bed when the Vice President Jessica Alupo arrived for a mass organised by the Archdiocese of Mbarara Development Association that was held at Kitante Primary School with her husband Peter Abeine.

While addressing the congregation, the Vice President who began her address speaking in Runyankole disclosed how she is a parishioner of Nyabwinna.

“As you may all know , I have a village there called Rucumu and I am  happy that some people here are from that village , but most importantly Christians who animated this Mass are from Nyabwina Parish,” she said.

Shortly after addressing the congregation Alupo unveiled her husband.

“Before I read my message, I would like to introduce my husband who is from Rucumu village, to come here and greet the Christians before I continue , “  she said.

While greeting the congregation, her husband  Abeine   disclosed how  he comes from Nyabwina Parish and also spoke about the greatest  commandment Jesus gave to his followers..

Alupo brought greetings and regards from President Yoweri Museveni and First Lady Janet Museveni who she said gave her permission to attend the function. She later handed over sh130m the President donated towards the construction of the association’s multipurpose complex in Rubaga, Kampala and  also pledged shs10m.