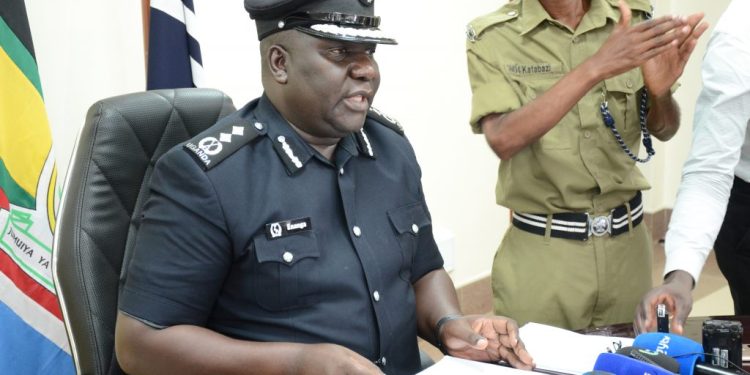 Police in Iganga has arrested Olele Dan who claimed to be the brother of Inspector General of Police, Martin Okoth Ochola. Olele was arrested over theft.

According to police spokesperson Fred Enanga, Olele is suspected to be involved in a case of conspiracy to defraud and theft of Shs150 million allegedly donated to New Beginnings International Ministries, for the construction of a Maternity Ward, in Iganga district.

Enanga explained that the facts they have gathered indicate that New Beginnings International Ministries, through their CEO, Henry Isoba, entered into an agreement, with Olele, a 56-year-old Civil Engineer, of Wailaka Central, Kakira Parish, in Jinja district, to construct the maternity ward at a cost of Shs176 million.

“Surprisingly, on 18.06.2022, at around 6 pm, the CEO proceeded to inspect the project site, with cash Shs150m in his car a Premio registration number UAX291X, he found when the Project Engineer was absent but went on to inspect the site.

After inspection, he re-entered his car which had remained unlocked, and drove off. He, however, reached home and realised the money had been stolen from his car,” said Enanga.

“We are now investigating circumstances under which, the money was stolen from the CEO’s car, while at the Project Site. In addition, we are in receipt of two contract agreements of Shs176m and Shs75m, respectively signed between the two parties, that is also a subject of our investigations,” he added.

It was on such grounds that Olele Dan was arrested.

“It is during the arrest, that they claimed, Olele Dan, called himself, a brother to the IGP and further using that privilege to extort money from the public and also get special treatment from the police,” said Enanga.

He, however, stated that Olele is not in any way related to the IGP.

“We wish to refute the claim as totally fallacious. The IGP and his family, categorically reject the claim as false and an insult to the family,” he said.