Inside the NRM-DP cooperation agreement: NRM to back DP EALA candidate, another DP official lined up for junior ministerial post 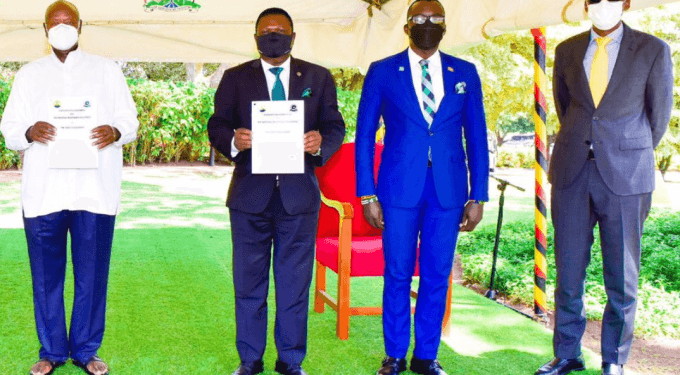 Details of the working cooperation agreement between the ruling National Resistance Movement (NRM) and the Democratic Party (DP) have emerged following a leaked document.

On Wednesday, NRM and DP penned a cooperation agreement. Both parties were represented by President Yoweri Museveni and Norbert Mao, respectively.

However, the public has been yearning to know the details of the agreement as Mao has already been appointed as the Minister of Justice and Constitutional Affairs. Parliament will vet him today.

This website has gotten access to the agreement document, and Mao has confirmed that the document was a draft as they have already made a few changes.

According to the document, DP has an opportunity to select one of its members that Museveni will appoint as a junior minister.

In addition, DP has been granted the green light to propose up to four individuals for appointment to departments, statutory bodies, and government agencies.

DP also asked the NRM to support the nomination of their Member of Parliament to be the Chair of a Standing Committee and another member to be appointed in the role of Deputy Chair of an additional Committee.

The document further reveals that the NRM will support the election of the DP candidate to the upcoming East African Legislative Assembly (EALA). And according to reliable sources, DP secretary general, Gerald Siranda will take up the position.

With Mao already appointed as a minister, his roles have been specified. He is mandated to coordinate the National Dialogue and the whole government’s response to constitutional reforms with the responsibility of coordinating budget proposals in the Justice, Law, and Order Sector.

In the document, DP agreed to support the National Resistance Movement Government on procedural motions in the House and in Select/Sessional Committees.

However, DP will determine its own position in relation to any policy or legislative matter not covered by the ministerial portfolios and areas of cooperation set out in this agreement.

Museveni and Mao agreed to meet every three months while the Secretary Generals of the two parties will meet regularly.

“Mao as a person lobbied for the job, “DP’s Lulume Bayiga reveals it’s not a party decision to cooperate with NRM

"Mao as a person lobbied for the job, "DP's Lulume Bayiga reveals it's not a party decision to cooperate with NRM