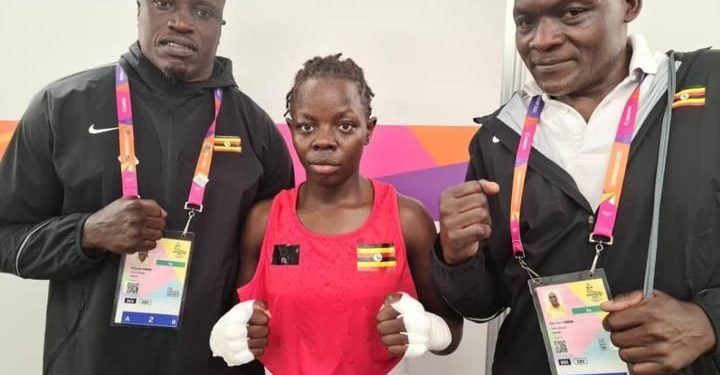 On Wednesday, Uganda was guaranteed another medal at the Commonwealth Games in Birmingham after boxer Teddy Nakimuli qualified for the women’s semi-finals.

Namuli is the first female boxer to represent Uganda at the Commonwealth Games, and she has already gotten the country a medal even before throwing a punch.

The female boxer received a bye to the quarter-finals and on Wednesday, she was set to step into the ring for the first time to face Serra Leone’s light-flyweight boxer Sara Haghighat-Joo.

However, Sara Haghighat-Joo failed to make Nakimuli’s weight and thus she was handed a walk over to the women’s light-flyweight semi-finals. All semi-finalists are assured a bronze medal.

Nakimuli now has enough energy in her “tank” to upgrade the assured bronze to silver or gold if she progresses to the finals.

In 2018, Juma Miiro was the only Ugandan boxer to win a medal at the previous Commonwealth Games in Gold Coast. He won a bronze.

Uganda has a chance to better the 2018 boxing performance as Isaac Owen Kibira is in contention for the medals. On Tuesday, he progressed to the quarter-finals of the men’s welterweight division.

He will now face Stephen Zimba of Zambia today.