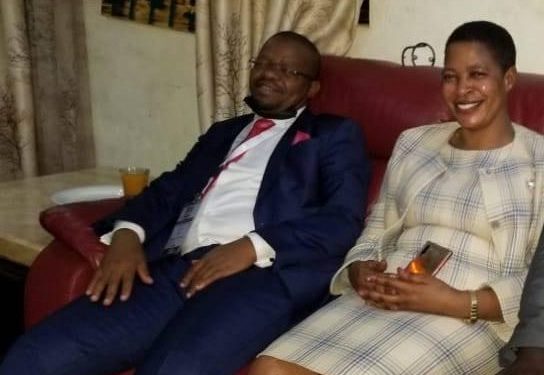 Geoffrey Rwakabale, the former Makindye Division Town Clerk, who receded the registration of the marriage has reportedly petitioned the Inspector General of Police (IGP) Martin Okoth Ochola, alleging “threats to his life,” according to the Daily Monitor.

Earlier this week, There has been a back and forth on the marriage registration of Speaker Anita Among and her husband Moses Magogo.

It all started when a letter from the Makindye Division Town Clerk surfaced on social media. In a letter dated August 16 signed by Geoffrey Rwakabale and addressed to the Registrar of Marriages in the Uganda Registration Services Bureau (URSB), the marriage was called off and deleted from the Division Customary Marriage Registrar.

URSB responded in a statement saying that the Town Clerk has no power to cancel the marriage. It says that the union of Speaker Anita Among and FUFA boss Moses Magogo is valid.

However, the fresh development indicates that Rwakabale is fearing for his life.

According to an article run by Daily Monitor, Rwakabale claims that unknown individuals have trailed him over the last few days, and he believes that exercising his powers has endangered his life.

Rwakabale, who now works in the office of the Kampala Capital City Authority (KCCA) is quoted as saying that he started being suspicious of the situation when Uganda’s deputy ambassador to Khartoum, Dickson Ogwang came to his office and introduced himself as “an agent of Speaker Anita Among.”

The two were reportedly engaged in conversation about the legality of the marriage between Speaker Among and Magogo.

Rwakabale claims Ambassador Ogwang was “already in possession of a fully filled and signed certificate of customary marriage only awaiting the signature” of the town clerk.

“I went ahead, as the town clerk, to guide Ambassador Ogwang on the legal requirements and procedures that have to be fulfilled before registration of a civil marriage in Uganda is concluded,” Rwakabale is quoted saying.

He added, “I indeed availed him a summary of the list of legal procedures and requirements.”

Rwakabale claimed that the situation has never been the same since his car was even reportedly hit by two unidentified people who were riding on a boda boda during rush hour traffic around Bukoto, a Kampala suburb.

“My life is in grave danger. I have raised this matter with the IGP and director of CID to beef up my security,” Rwakabale said.