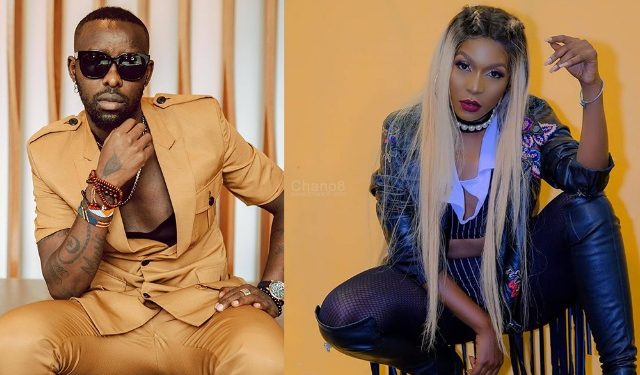 Following the allegations making rounds on social media that singer Karole Kasita is pregnant, Big Talent Boss Edirisa Mussuza better known as Eddy Kenzo has confirmed that she is pregnant.

This is after the trending social media video in which singer Karole Kasita is seemingly so tight with Kenzo who is seen in the video trying to check on the status of Karole’s pregnancy.

While appearing in an interview on local television, Kenzo was asked why he was trying to check Kasita’s pregnancy status as if he is the one who got her pregnant.

In response, Kenzo said that he wanted to confirm whether she was pregnant.

“I saw it and even touched it. She is pregnant. I was yearning to know the truth and when I got a chance to shoot a video with her I had to do the research myself and it’s true she is pregnant,” said Kenzo.

He, however, denied the reports of being responsible for the pregnancy.

“I am not responsible for her pregnancy. I only wanted to confirm if reports about her pregnancy were true,” he said.

The oil and gas plan will be implemented per the schedule, says Museveni

VIDEO: Football player runs out of photoshoot after the roar of a lion

VIDEO: Football player runs out of photoshoot after the roar of a lion