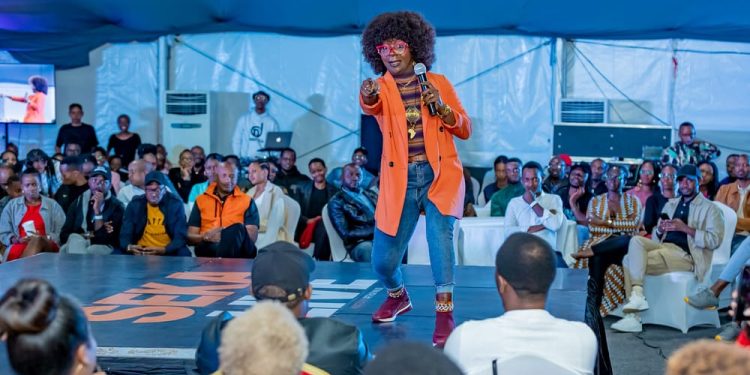 Over the weekend, Ugandan comedians Ann Kansiime, Don Andre, and Dr Hilary were in Rwanda. The three comedians joined fellow comedians who hosted them and shared the stage with them.

The show that took place in Kigali, the capital city of Rwanda, is known as the “Seka Live comedy show”. Every last Sunday of the month, it happens. The show was organized by one of Rwanda’s best comedians, Arthur Nkusi, and had over 1,000 people in attendance.

The venue, Camp Kigali, got people laughing from the beginning of the show to the end. The show opened with local Rwandese comedians who performed one after the other to set the mood a bit higher as the big players warmed up for the stage.

Arthur Nkusi, the host of the show later got on stage and, after cracking a few jokes, he then called on stage one of Uganda’s most creative and funniest comedians, Dr Hilary Okello.

Dr Hilary was performing for the first time in Kigali, but the love he received from when he got on stage to when he left made someone think he is Rwandese.

He cracked some jokes around the DJ, which made the whole hall house burst out into laughter. Dr Hilary told the crowd how one has to be friends with the DJ during performances. He did it while heading to the DJ to compliment how smart he is and that he is very good.

His 15-minute performance made the people of Rwanda finally know his name Dr Hilary Okello, thanks to his wonderful jokes.

Don Andre later showed up on stage. He is not new in Rwanda. He has performed there several times, and this never stopped him from cracking them up one more time.

Don Andre, who jokes about circumcision and his prayerful born-again mother, added the vibe from where Dr Hilary had stopped.

The headlining act, who is one of the best female comedians in Uganda, East Africa, and Africa, Ann Kansiime, took to the stage amid standing ovations.

She is a darling in Rwanda and her performance came easily for her as she was not performing for a new crowd.