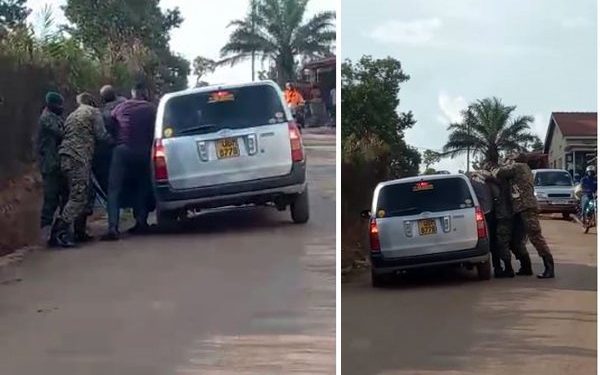 According to reports, the incident happened at around 1 pm.

In a video making the rounds on social media, the group of Pakistani was travelling in a Fielder vehicle. The armed men in military attire, together with a man in casual wear surrounded the Pakistani nationals and kidnapped Hensam Muhammed, a car dealer.

They dragged him into a Probox car and drove off.

Kampala Metropolitan Police deputy spokesperson Luke Owoyesigyire confirmed the incident and said that the victim was later dumped by his captors at Kasangalabi on Mukono-Kayunga Road.

“Investigations are ongoing to identify the suspects and also understand the details of the incident. The victim is still in shock. We shall record his statement later,” Owoyesigyire told the Daily Monitor.

The victim is said to have been robbed of an unspecified amount of money before being dumped.

Of late, there has been a rise in incidents of security operatives picking civilians.