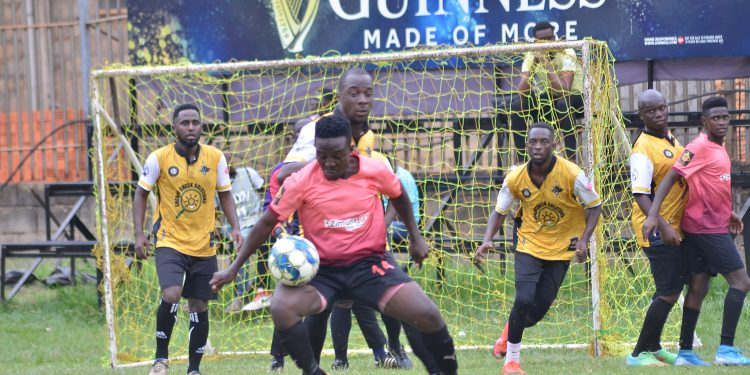 The Zuluz team taking on the Devils at legends on Sunday.

SMACK League Sundays are now “major plot” in Kampala because of a combination of football, top artiste performances, networking and banter.

Yesterday was no different as old boys of St. Mary’s College Kisubi and other fun lovers flocked Legends, Lugogo for Matchday-16 of the league.

The day saw competition at the top get tighter as Zuluz (class of  2009) increased their prospects of winning the league after beating Devils 1-0 to make 34 points just one point behind the table leaders Block Owners who drew 0-0 against the Mafiaz.

However, football is not the only crowd puller at the Guinness-sponsored league. The outfit that was meant to bring together SMACK alumni has transformed into a social phenomenon that attracts and entertains Kampala party lovers. Hosted by a different cohort each match day, the league has made a name for itself for great entertainment as each hosting class makes it their goal to outshine their predecessors.

Mama Teo Legends and the Gladiators who hosted Sunday’s do made no compromises when it came to entertainment. The two brought in the Abeeka Band who are popular for making one dance and sing along to every song and boy did they live up to their reputation.

Abeeka arguably shared the ululations with the Mama Teo Legends. The team is made up of OBs who were in SMACK in the early 90s and 80s. With Sanyu FM’s Roger Mugisha as host, they claimed the bragging rights for having invented the Jabba dance and put up an entertaining display.

Now in its fifth season, the SMACK League was created by the old boys of St Mary’s College Kisubi to unite, network, creating opportunities, keep fit and give back to community.